Greetings! I’m Vivien Williams, and I joined the team on the 1st October as a Research Assistant. I focus mainly on the musical side of the project, so for instance I’ve been dealing with helping the research of sources for the Scots Musical Museum, comparing the tunes with those provided in previous musical collections and manuscripts. The issue really isn’t quite as straightforward as it sounds! Sometimes a song will go by one title but correspond to a tune with a different title – that was indeed very common. Yet that same tune may be called differently in another collection, which also contains the song, but under a different name again! And what about spelling variations? And fragments of one tune which appear in one publication but are then combined with other melodies? The Scottish music scene during Burns’ time was thriving, but far from linear.

For my Ph.D. I have focused on the ‘Cultural history of the bagpipe’: I have analysed the instrument’s role and symbolism in various fields, from literature to art, music, satire and prints. So in a way my research has been very much about ‘things’ – which is the approach I wanted to give to my blog.

The Hunterian, at the University of Glasgow, holds a vast collection, and the items on display are but the tip of the iceberg. A number of them deal specifically with Robert Burns – from medals to jugs, banknotes, engravings and illustrations, all testifying the impact of the poet, and his widespread appreciation.

Today my focus will be on a colourful bowl, crafted in 1896 on the occasion of the centenary of Robert Burns’ death (item GLAHM 138385).

The manufacturer unfortunately is unknown, but the bowl is of Scottish make – which shows the interest and appeal that Burns triggered in his homeland. His centenary was celebrated with countless events, big and small: from exhibitions to talks, special editions of his works, and of course the production of merchandise and souvenirs of all sorts.

This particular bowl measures 13,5cm in diameter, and 7cm in height. It bears three images: the most recognisable is of course an oval with Robert Burns’ portrait. 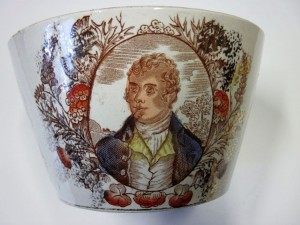 Burns is depicted in the usual three-quarter-view position we are accustomed to today, and in the attire he is ‘traditionally’ portrayed in, but his hair appears somewhat curlier compared with some of the better-known illustrations. The movement and waves of his hair almost speak back to the dynamic sketch of the trees and bushes to the right in the background – almost as if to highlight a certain communion with nature. The oval is surrounded with flowers and vegetation, to which dashes of red and gold give a warm, autumnal feel. A thistle, the ‘flower of Scotland’, could not be absent from such a frame.

By turning the bowl we find another image, mainly in greens, yellows and blues: this is Burns’ mausoleum, in St Michael’s Church in Dumfries. 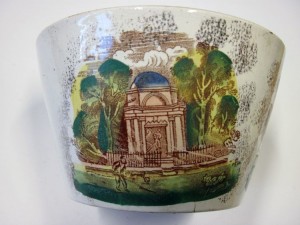 This was not Burns’ original burying-site, as he was first buried in the same churchyard but with a very modest stone slab to commemorate him; in 1815 he was moved to this rather more Palladian structure, which was felt to make justice to the poet’s memory better than a simple slab would. The people depicted inside the mausoleum and pacing the ground outside in meditative attitude are a clear indication of how the place was still visited and people would feel the urge to pay a tribute to the national bard.

The other, most colourful image on the bowl depicts a typical farm cottage: though not whitewashed as we know it today, we can assume this humble house represents Ellisland Farm, where Burns lived and farmed for four years. 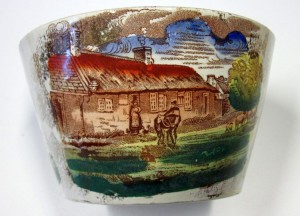 The rural dwelling is depicted inhabited by rustic folk, who live in close contact with nature and their animals. The atmosphere brings us back to a time when Robert Burns was leading a farmer’s life. The picture is colourful, the scene placidly industrious: a farmer (Robert Burns? is that how he lived?) secures something on a donkey’s back, ready for his toil, as a lady (Jean Armour? did a moment like this really happen?) stands at the door about to commence her daily errands. There is an inspiring stillness and peace in this genre-scene of daily country life.

Whether we view this bowl as an example of a consumerist way of commercialising the event of Burns’ centenary, or whether we think it is only right to keep the memory alive and celebrate by whatever means such an important national figure, what is significant is that there was a market for these articles. Can’t we all share the delight of possessing an object, a tangible piece of handicraft which somehow reminds us of a person, a moment, an experience, an event? People wanted to preserve the memory of Burns; he was very much alive in people’s hearts, just as he is today.