A response to the discovery of the Bemis Manuscript of ‘Red, Red Rose’

I am delighted to see Patrick Scott’s blog about his detective work in pinning down the missing ‘Bemis MS’ of Burns’s ‘Red, red rose’, as I had been one of the culprits who had inspired this new case for him to solve. In preparing our new edition of Burns’s Songs for George Thomson, I had been checking manuscript sources for songs against the Index to English <sic> Literary Manuscripts, III.1 (1986) that Patrick cites at the beginning of his blog. While this is a most useful starting point, queries about the whereabouts of some manuscripts are common, and those around the listing for ‘Red, red rose’ provide a fine example. My initial query to Patrick was made in May of last year, when I was doing final preparations on my note for the song as published by Thomson, first of all, in the fourth set of his Select Collection of Original Scotish Airs in 1799 (as no. 89). I indicated that I was ‘going mad’ in trying to locate this ‘Bemis MS’ version of the song referred to by James Kinsley in his Oxford edition of 1968. Across the coming days several emails from Patrick arrived in my inbox, drip-feeding me with useful details about the biography and collection of Frank B. Bemis. As the first lockdown of the pandemic loosened off a little, the Lilly library staff were able to follow up and to access the manuscript leading to the confirmation that we were seeking. Of course, Patrick’s further detailed investigation turns up much more significant information to boot, revealing new details of Burns’s Dumfriesshire neworks, the complexities of Burns’s own transmission of manuscript songs amongst friends and highlighting, yet again, the musical influence of Robert Riddell (more to be done on this, for sure!).

What became clear is that the Bemis MS doesn’t play a direct role in Thomson’s printing of the song. As Patrick notes, Burns’s lyric first appears in Urbani’s collection in 1794 with the latter’s choice of melody. Burns’s correspondence with his friend Alexander Cunningham tells of his annoyance about this and highlights the clear rivalry between Urbani and Thomson, which I discuss further in the Introduction to Songs for Thomson. Burns, as far as extant evidence supports, does not send the lyric directly to Thomson. Kinsley thinks that Thomson may have used Cunningham’s copy as his source. There are notable similarities in the texts, but little additional evidence to support this. It may be likely that Thomson simply lifted (with some variants: ‘the’ not ‘a’ in line 1 for example) the text from the Scots Musical Museum where it appeared in 1796 (v, 402 & 403). Back in November 1793, commenting on his love of tunes that are both ‘simple & wild’, Burns suggests to Cunningham that Thomson will find his initial choice of tune – Niel Gow’s ‘Major Graham’ – more of ‘the ludicrous & the absurd’ (Letters II, pp. 258-9).  True to Burns’s expectation, Thomson goes on to select a much tamer tune, which is labelled ‘Wishaw’s Favourite’ by William Marshall. As far as we can find, Marshall’s tune does not appear in print before 1822 and we are now pretty sure that Thomson lifted the tune, ‘Mrs Hamilton of Wishaw’s Strathspey,’ from either Gow’s Third Collection of Strathspey Reels of c. 1789 or Aird’s Selection of Scotch, English, Irish and Foreign Airs, vi of 1801. 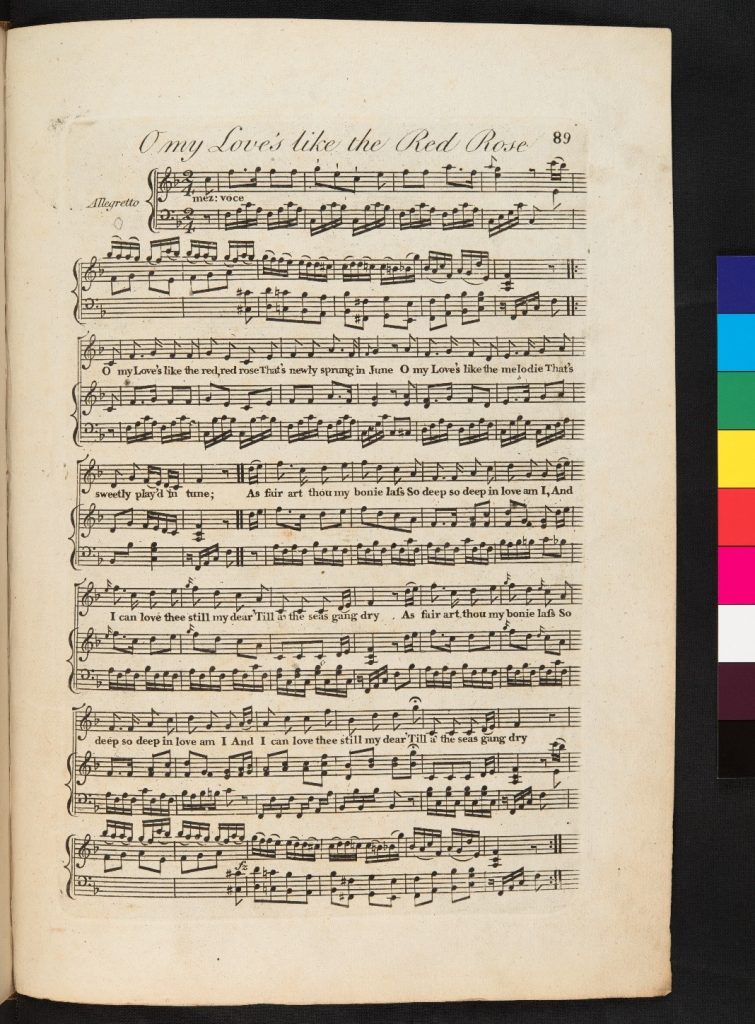 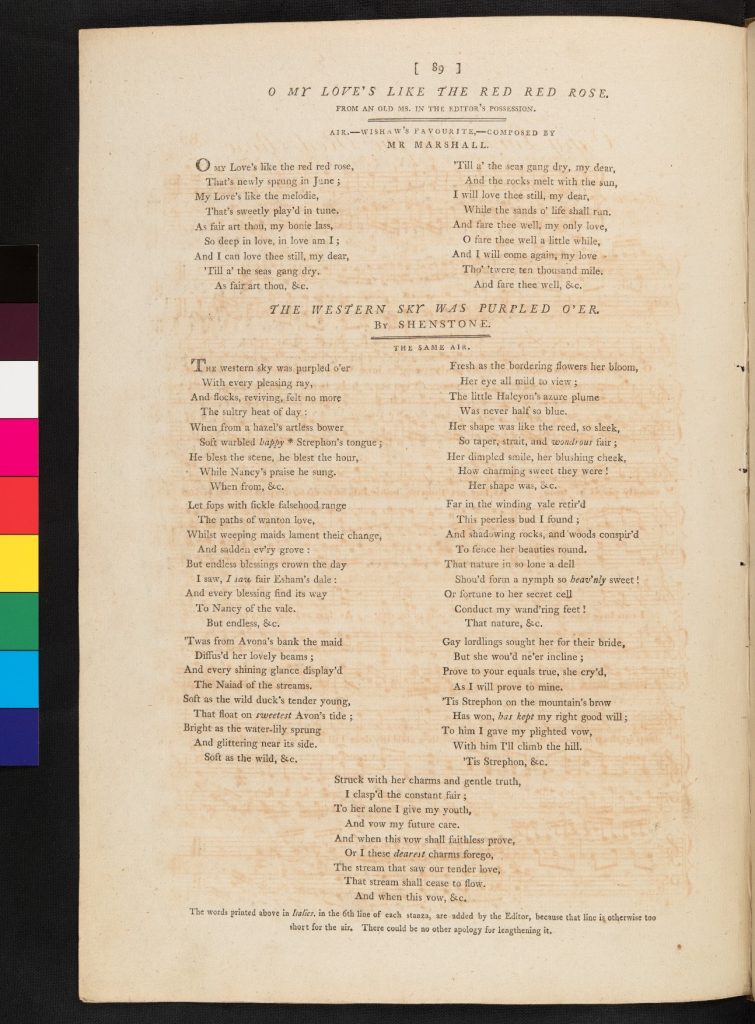 As explained in a footnote, Thomson has extended the sixth line of Burns’s two octaves in order for the text to fit this new choice of tune. Most interesting of all, however, is that Thomson never attributes the song to Burns. Is this because, like later editors, he believes that it is simply a fine example of Burns’s lyrical theft and subsequent alchemy? The song appears with two different musical settings in Thomson’s Scottish collection: the first by Leopold Koželuch in 1799 (seen here in images reproduced by kind permission of Bill Zachs) and later, in 1826, by Carl Maria von Weber. And to find out more please check in with the new edition of Burns’s Songs for George Thomson (due for publication on 18 February 2021).