A Toast for George Washington, as well as an ‘Ode’? 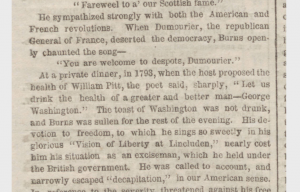 As I was searching through 19th Century American newspapers and periodicals at the Library of Congress for Burns material, I came across an interesting transcription of a speech by Henry Ward Beecher in 1859, Burns’s centenary year.  Beecher delivered his ‘oration on Burns’ to a crowd at the Cooper Institute who had gathered to celebrate the poet’s birth.

A charismatic  clergyman, social reformer and known supporter of the abolition of slavery, Beecher was also renowned for his powerful speeches. In his 1859 address, Beecher made it clear why Burns ought to be celebrated and remembered in America, the land of ‘freedom and democracy’:

‘It’s is peculiarly fitting that the anniversaries of Burns should be celebrated in this land of freedom and democracy, for he sprung from the people, remained to the end one of the people, and his heart was ever with the democratic institutions of the United States.  Like the French democrat and patriot, Beranger, whose genius so strongly resembles his own{…}he painted with a pencil of light and of fire the manners of the people, their every day pursuits and the scenes of their labors.”

More interestingly, Beecher went onto describe an alleged incident about Burns proposing a toast to George Washington, the first president of the United States:

”Burns sympathized strongly with both the American and French revolutions[…] At a private dinner, in 1793, when the host proposed the health of William Pitt, the poet said, sharply, ‘’Let us drink the health of a greater and better man – George Washington “ The toast of Washington was not drunk, and Burns was sullen for the rest of the evening.”

While, with no other known references to the incident, Beecher may have taken ‘artistic’ liberty with this reference, its also not entirely unlikely. 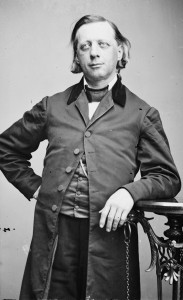 After all, it must be remembered that Burns chose to write an ‘Ode’ to the first president of the United States in 1794.  Quite remarkably, the poem did not actually appear in its entirety until 1873 when American bookseller Robert Clarke purchased a manuscript in London and subsequently transported it to Ohio.79 That it first appeared across the Atlantic might seem like a fitting twist of fate given the poem extols the first US president, however, the delayed publication in Britain was more likely due to the careful censorship of Burns himself and subsequent editors of his work – who feared the personally endangering impact of heralding Republicanism and the United States. 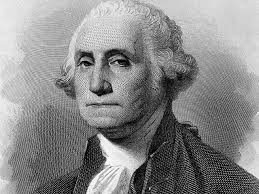 Clearly, however,  Washington was a symbolic figure for Burns in that he represented liberty, strength and freedom of the individual. In his book Transatlantic Radicals and the early American Republic, Michael Durey suggests that this idealisation of the president was shared among men of radical, dissenting beliefs, particularly in Scotland and Ireland, where to some he was a ‘living legend, whose lengthy shadow blanketed national politics’. Similarly, it seems, Washington’s exertions, or at least his symbolic power, had been influential on Burns.

Whether or not Beecher’s assertion that Burns once raised a glass to Washington instead of Pitt, remains a point of contention. But it certainly provides much food for thought and the poetic imagination.