A web resource for the illustrations to George Thomson’s collections

It’s been another intense period, checking through the final details for Murray Pittock’s volume on the Scots Musical Museum, now sent to Oxford University Press. I’ve also been preparing the digital files of the volumes’ fac-similes for OUP – no exaggeration: my computer has worked day and night non-stop for about five days, in order to upload everything! I can’t deny I felt a bit emotional about waving goodbye to the Scots Musical Museum phase, which started right from the beginning of my post here at ‘Editing Robert Burns for the 21st Century’…but something tells me that with proofs and final double- checks (even triple!) I’ll be greeting it back again at some point in the future.

In the meantime, I have also been working on a web resource on the illustrations to George Thomson’s collections. Dr Kirsteen McCue thought it would be a good idea to give the reader a glimpse of the world of the illustrations in Thomson’s collections, and I’ve really enjoyed putting this website together, as my personal research has always had an eye towards the visual arts. Our virtual exhibition is a complement for the printed volume, which will not include the illustrations. But the illustrations were an integral part of George Thomson’s publications, and he put a lot of effort into contacting the artists and engravers; he also stretched his finances in order to make the vignettes part of his books, and he took pride in them. He wanted his collections to be more elegant, refined, and pleasing to the eye than other comparable contemporaneous works on the Scottish and English market: the artworks had primary importance in Thomson’s view of his publication. For this reason, we are pleased to present you our virtual exhibition, about the artists and artworks related to Robert Burns and his poetry in George Thomson’s collections: http://burnsc21.glasgow.ac.uk/the-illustrations-to-george-thomsons-collections

As is often the case with George Thomson, things have not been exactly straightforward even for compiling this exhibition. To start with, the colophons, illustration dates, publishing dates, and bibliographical information for the volumes were not always consistent. I don’t know what I would have done without the analyses previously undertaken by Kirsteen and Professor Marjorie Rycroft! Furthermore, often the illustrations in one volume did not match those in other volumes published the same year. Luckily I had the background information, or it would have been very puzzling. In fact, originally the illustrations were offered only to the subscribers; but by 1801 they had become an integral feature of the publications. They were also sold separately, as individual artworks. This ‘uneven’ use of the images means that today a given volume will not necessarily bear the same illustrations as another volume, though they both belong to the same ‘batch’ and were published in the same year.

Other little ‘glitches’ were those of a couple of illustration which bore ambiguous artist specifications. On one occasion the problem was simply trying to make out the name of an artist involved in a version of ‘Now see where Caledonia’s Genius mourns’ – I then discovered it was Maxim Gauci, but from the vignette it was difficult to establish as the name did not turn out very well on the paper, and could have been anything from “M. Gaud” to “M. Gauce”, “M. Gauze”…I have Glasgow University’s History of Art Research Centre to thank for details and information about this artist, about whom it was difficult to find information. 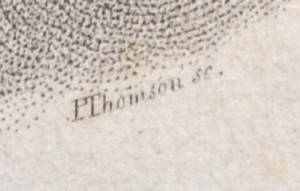 Another moment of confusion happened with another version of ‘Now see where Caledonia’s Genius mourns’, which looked to me as though it was sculpted by “P. Thomson” (Paton Thomson, George’s brother, also involved in other works in the collection), but by comparing the illustration with others I had available I was able to notice the artist was a “J. Thomson” – no relative of George’s this time! – but “John Thomson”, quite a well-known artist.

But enough about the ‘problems’: what we have here is a showcase of over ten artists, all working (often in collaboration) to produce top-quality prints and engravings for George Thomson’s collections of Scottish music. Thomson contacted some of the very best painters and engravers of his time: from David Allan to Thomas Stothard, from Alexander Naysmith to Robert Scott. Robert Burns himself was very pleased with the artistic side of the work, and had very positive things to say about the artists and their designs, particularly David Allan’s. The pages I have created are only for the artists involved in illustrating Burns-related material – from portraits to poems and tributes – but Thomson’s endeavour went beyond that. He was over-enthusiastic with his artistic commissions and possessed more illustrations than he could publish; he still had some in his possession when he died. He succeeded in creating a collection of musical and artistic prestige, which he wanted to stand out from the rest also for its beauty and visual appeal. I hope you will enjoy our virtual exhibition!