The format for a private singing lesson has largely remained the same for the past 250 years: a student and teacher sit in a room together, usually with a piano and work to improve the student in a variety of technical areas. However, the setting for these lessons has greatly changed for the majority of singing students. In the 18th century, the vast majority of amateur singers came from upper or middle class backgrounds and the teacher would come to their affluent homes to instruct them. Only a small number of singers engaged in lessons in order to become professionals and their music lesson experience was quite different. Whether they were a man or a woman, aspiring professionals typically would serve an apprenticeship and live-in with their teacher for a number of years. Domenico Corri in his 1810 treatise The Singer’s Preceptor described in detail his apprenticeship with the great vocal teacher Niccola Porpora. Gertrud Mara was similarly engaged briefly in an apprenticeship with Domenico Paradisi. 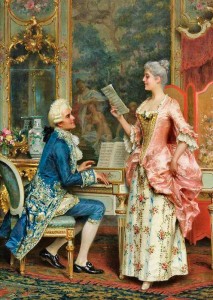 The Singing Lesson by Arturo Ricci, 1847

Most of what is known to have been taught in singing lessons comes from singing treatises published throughout the 18th and early 19th century. Yet, most of these treatises were created and printed for the use of ladies in the domestic home and not for the aspiring professional. It was considered a part of a lady’s proper education to learn to sing and play the piano and this would allow her to entertain guests who came to visit the home and also as a way of entertaining oneself throughout the day. An offshoot of this growing domestic music market was that publishers regularly printed simplified versions of the most popular songs appearing on the stage or in concerts for amateur music makers to purchase and enjoy at home. But most of these amateurs wanted to mimic the vocal stylings of their favourite professional singers, who typically were trained using the old Italian school of singing. Thus, more and more Italiansisms begin to punctuate British national song, particularly Scot song. 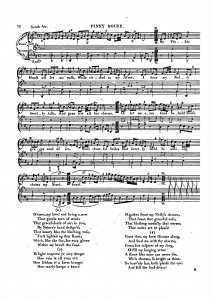 ‘Scotch Air’ appearing in The Singer’s Preceptor by Domenico Corri, 1810

The Italian style of singing encouraged simple melodic lines to contain extravagant vocal ornamentation and this can be particularly seen in the Thomson settings of Burns songs. But what is frequently repeated in singing treatises from Britain is the importance of the clarity of language but it was not enough to simply sing the text clearly. What was of key importance, particularly when singing in Scots, was to sing each sentence with the correct grammar and accent of the word by using a variety of musical devises. If we take Burns’ text as an example, the description and liveliness is largely down to the construction of the poem itself, including the grammar and sentence structure.

Ae fond kiss, and then we sever;

Ae fareweel, alas, for ever!

The temptation, once a melody is added, is to place emphasis on the wrong part of the sentence, and change the emphasis to suit the musical phrase. But in the 18th century, most amateur music makers would be well versed in rhetoric and would use this to ensure the grammatical stress was correct. Finally, ornamentation and dynamics would be used to decorate the most important words of the spoken phrase and these could be quite subtle. Techniques, such as breath control, which now take up a huge proportion of the discussion in present-day singing lessons, were frequently not addressed in detail by 18th century singing treatises This is because there was no to maximise on breath production as most amateur music maker would not be performing for a large audience or in a large room. 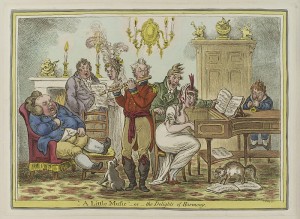 Music making for the amateur was for one’s own pleasure or to entertain a few friends. This does not mean that singing technique was of a lower standard but rather that the focus of an 18th century singing lesson was to teach vocal techniques that captured the beauty of poetry.