Anecdotes and thoughts about my work so far

I think it’s time for me to write an update about my work here at the Centre for Robert Burns Studies. It’s been over six months since I started working on for the Editing Robert Burns for the 21st Century project. Time has really flown, and through the weeks and months I feel I keep developing greater awareness and confidence in the work I do. I have been responsible for a number of different tasks, mostly dealing with the field of music and song.

A big chunk of my work when I first started was cross-checking the possible sources for the tunes and songs of the Scots Musical Museum. This has meant coming in contact with very old, beautiful, sometimes faded manuscripts. Some were digitised, so I could consult them sitting comfortably in the office; some were in Glasgow University Library, and some were to be found in other libraries (especially the National Library of Scotland). Some have been re-printed in modern times, some were very delicate and threatened crumbling in my hands, others were more freshly bound; some were lute tablatures, some bore the squiggles, decorations and writings of the author and felt much like a window onto the life of someone who lived in the seventeenth or eighteenth century. Whenever I open a manuscript I almost feel that by looking at those handwritings, turning the pages they turned and touching the ink they traced on the leaves I can grasp some of the essence and personality of the authors. 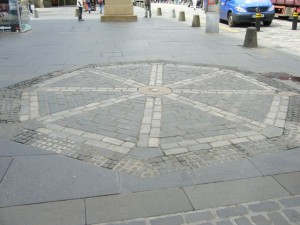 At one point I had to go through the manuscript of James Guthrie, the Scottish Presbyterian minister who was hanged in Edinburgh for high treason in 1661. The reason for looking into this manuscript was that, amongst pages and pages of incredibly neatly-written sermons in the smallest, tidiest handwriting I’ve ever set my eyes on, there is a rather unexpected section which includes tablatures for a number of songs, including versions of, for instance, ‘My Sandy Gied to me a Ring’. I must say I could not help feeling quite strange when I walked past the spot where he was executed, as I was walking down the Royal Mile on my way back to the station, after having spent the morning reading his writing, the farewell letter to his wife, and the tablatures I had set out to look at.

You really cannot tell what you’re going to be learning about and coming in contact with, when working on this project!

Right now I am working on George Thomson – “the friend of Burns”, as he is often identified in newspapers and periodicals of his time. I have been focusing on the reception of his collections of songs, and there are lots of interesting narratives there which I hope to share with you over the next few weeks.