Just a quick update on things….you may have seen Vivien’s live tweets ! We held the first of our performance workshops for the project a couple of weeks ago, working with a group of young musicians exploring the very first publications of Burns’s songs in both The Scots Musical Museum and from the collections published by George Thomson. Working with period instruments and with professional coaches, Ruth Slater and John Kitchen, we worked our way through over 20 of the songs of Burns as they appear in these two collections. 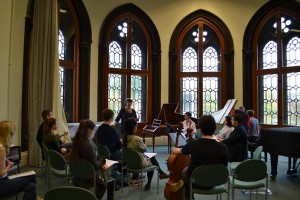 Across two days we worked with the musicians using the printed copies Burns’s contemporaries would have seen. We had really interesting debates around pitch – because it was different then than it is now and because it’s a challenge today! – and we talked about the difficulties of working with texts in Scots. We ‘jammed’ some of the Museum songs, because they don’t have a suggested line-up of singers and instrumentalists and can be interpreted very freely in musical terms. And we discussed how user un-friendly some of the Thomson songs are in print.  Sometimes Thomson’s positioning of Burns as second or third choice text means you have to work out how to sing the Burns text to music which has a completely different set of words underneath the melodic line…so that can be a real challenge for singers. 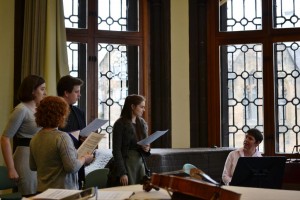 We are now gearing up for a busy rehearsal session in Glasgow’s Pollock House tomorrow…this will let the musicians perform these songs in a contemporary setting – the lovely big dining room at the house was completed in the early 1750s…and we’ll let you know how it goes. Next week they will come back to Pollock House to make formal recordings of the songs which you’ll be able to hear next year on our website. 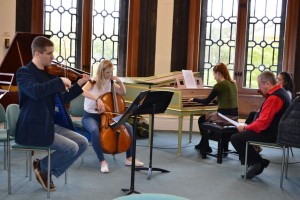