Considerations on my literary prize

it’s been a while since my last blog post, but today I would like to share with you this episode which has made me very happy. 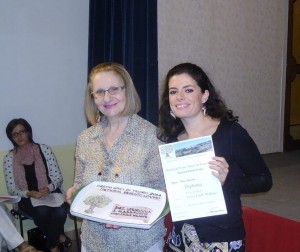 I have recently come back from a short break in Italy, where I have been to pick up a literary prize! Now this is not the first time I win a literary contest, but what makes this one special for me is that it’s the first time I attempt submitting my poetry to a contest. Until now I have specialised in short stories; poetry has always been something that ‘other people wrote’, but not me. And yet I found this contest, an international Memorial to Ernesto Covino in the beautiful area of Irpinia, in Southern Italy, and thought I’d give it a try. It was divided into three sections: Italian poetry, Vernacular poetry, and Vernacular Humorous poetry. I chose the third one.

The reason why I am writing about this in the context of this blog is that I feel that I would never have attempted to participate to a poetry contest, let alone a vernacular one, had I not gained experience and inspiration from my work in the ERBC21 Project. I have grown more and more familiar with the medium of poetry by being in such close contact with it day after day (also through teaching assistantship) and by analysing it from all sorts of different angles and perspectives. And Burns’ lesson on the importance, status and validity of the vernacular as a vehicle for cultural and creative communication rounded it all off.

The heritage of dialects in Italy is extraordinarily rich, and shamefully under-studied; each city has its own dialect which is different from that of the neighbouring cities. People coming from different parts of the same region could have serious problems communicating if they only spoke dialect – and a person from Milan or Turin would have no clue what a person from Bari or Palermo are saying! After all, ‘my neighbours’ are Albania, Greece, Libya, on the other side of the beautiful, tormented Mare Nostrum, whereas Northern Italy borders with France, Switzerland, Austria…so it’s understandable how the linguistic influences and therefore the sounds are very different.

Due to my mixed background I remained unacquainted with Andria dialect (andriese) for years, and primary school is where I first came in contact with it. Speaking dialect was something my teachers would box my school-friends’ ears for – it was not to be done, and we soon learned (often the hard way) to address our teachers in Italian. Although I could always see the purpose of learning Italian in a country with such a diverse map of dialects, it is not until now that I see how much better it would have been to integrate both sides – make us all bilingual and, in a way, bicultural, by embracing a heritage which spans from La Divina Commedia to Sand R’ccard venn da l’Inghilterr (a popular song dedicated to St Richard, the Patron Saint of Andria). We would have learned to be proud of the history of our land, and of the culture it is the cradle of; we would have carried the dignity of it in every vernacular word we spoke.

The poem I wrote is based on a true story, of a humorous linguistic ‘misunderstanding’ caused by the assonance between “Teng ioj” (“I’ll hold it”) and “Thank you” – it’s a bilingual poem, which blends my knowledge of dialect and English. Campania (where the award ceremony was held) and Puglia (where I was born) are very close, and yet the attendees did not understand me when I read out my ‘La Nanonn abbasc au Prtaun’, so I had to provide an Italian version and, as often is the case, a lot of the feeling was lost in translation.

So I’m proud to have attempted this, to have given andriese a chance, and to have given this neglected dialect the opportunity to win first prize in an international literary contest. Out of 150+ poems arriving from all over Italy, and from countries such as Canada, Tunisia and the States, my little Petrarchan sonnet in andriese, composed in Glasgow, won the first place. And really a good part of this I owe to the ERBC21 Project!