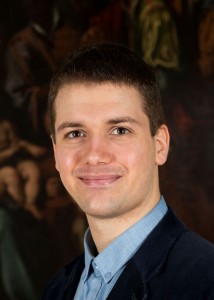 Hungarian musician Dániel Máté Mészöly started playing the violin at the age of nine. He learnt all the necessary skills to successfully perform on numerous concerts and competitions from Judit Szászné-Réger. In 2010 he started his undergraduate studies at the Royal Conservatoire of Scotland. After successfully graduating with a First Class Honours Degree he is currently in his last postgraduate year studying with Christopher George and Ruth Slater on the baroque violin. This was made possible by a scholarship from the RCS and the support of the Helping Musicians UK Parikian Award.

Dániel attended many masterclasses to learn from great musicians such as Leland Chen, Ilya Gringolts, Rachel Podger, Jacqueline Shave and Barnabás Kelemen. As a result he won many competitions at the RCS in both solo and chamber music. He also won third prize at the Ede Zathureczky National Violin Competition as well as on the Andrea Postacchini International Violin Competition. At the age of 14 he performed the first movement of Mozart’s G major violin concerto with the Budapest Chamber Symphony Orchestra. Since living in Glasgow he also had the opportunity to play with Ilya Gringolts, Rachel Podger, Nicola Benedetti, the Scottish Ensemble, BBC SSO (including leading Bartók’s Divertimento for Strings as part of a Side by Side), RSNO and the Scottish Opera where he was on trial for Sub-Principal 2nd Violin.

He has led the RCS Symphony Orchestra, Opera, String Ensemble and Baroque Ensemble numerous times and is asked regularly to play in other orchestras and lead as a freelance musician. To continue growing his love for chamber music he plays the viola in Sinopia String Quartet and the violin in Zengő Piano Trio performing around Scotland with the support of Enterprise Music Scotland. Since he always has space in his heart for baroque music he also performs in various baroque groups on the baroque violin as well as on the tenor or the bass viol from time to time in the Glasgow Gamba Club with Alison McGillivray.

As he knows how much he has to be thankful for from him teachers, he aims to pass on his joy for music, knowledge and experience to the next generation and to do so he teaches at the RCS Musicworks, NYCoS, as well as in private. He was also involved in NYOS education projects coaching string quartets across Scotland.