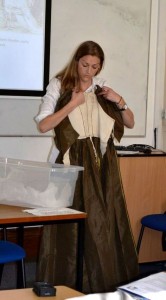 People in the eighteenth century had the same concerns about clothing as we do today: cost, comfort, fashion, and the situation in which the clothing was to be worn, would have all affected what was worn on a day-to-day basis.

All garments in the eighteenth century would have been made from cloth of natural fibres and dyed with natural dyes, and they all would have been handmade.  Woollen and linen cloth were in plentiful supply in Scotland and they could come in a range of qualities from coarse to fine, and so could suit all budgets although it was generally accepted that the best linen came from places like Holland.  Woollen cloth was often used for the outer garments; Scotland produced a lot of coarse woollen cloth and finer fabrics were available from England and further afield.  The other fibres that were available were not native to Scotland but were still in plentiful supply.  Silk, for example, was costly compared to the others – it was also much harder to keep clean – but this did not stop many people from owning a silk item, even if it was just a handkerchief or a garment made from a wool and silk mix.  Silk also had the advantage of being cool or warm to wear. Cotton, imported from India and then America, had at first been a high status fabric but by the end of the eighteenth century it was being used across a wider section of society, the main benefit being that it was light, durable, washable, and could be decorated to imitate the more expensive fabrics.

By the end of the eighteenth century, most men’s wardrobes consisted of what we would consider the three-piece suit: a coat or jacket, waistcoat and breeches. Underneath this a shirt was worn, typically made from linen which could be fine or coarse depending on what you could afford.  The richer you were, the more you would own so you would wash your linen rather than wash yourself.  This meant that to maintain a respectable appearance at least 2 shirts were needed so that you could be dressed while one set of clothing was being washed.  Clean linen was an important status symbol in eighteenth-century society – the whiter and brighter it was the better.  Detachable cuffs or ruffles and stocks could also help maintain an image of respectability and cleanliness, as well as helping to maintain a fashionable appearance.  If you could afford it outer garments would have been tailor made, otherwise you would have to rely on second-hand or homemade clothing.  If it was tailor made, of course, then it means performers and musicians might have been able to request certain alterations to allow greater mobility, particularly in the sleeves.

Like men, the first layer of fabric that women wore next to the skin was linen in the form of a shift of chemise, which could also handily double up as a nightgown.  On top of this women wore stays, the precursor to the corset.  Stays were made from whalebone or flexible cane and linen and they moulded the wearer’s torso into an almost conical shape.  They provided support and structure for the rest of the outfit, and would have been worn by women of all social levels, even those who did manual work.  On top of the stays came the gown and the petticoat – sometimes they would be matching, but often not.  Gowns were the most visible part of a woman’s wardrobe and so they played a key role in signalling her social status.  Fashions changed quite quickly at the end of the eighteenth century but the cost of fabrics meant gowns were not discarded if they were considered unfashionable, instead they would be altered and remodelled until they fit more with the current style.