Who was Robert Burns? What made him a poetic genius? And how did he become a global icon?

These are just three of the questions that learners will explore as part of the first ever online course about Robert Burns. 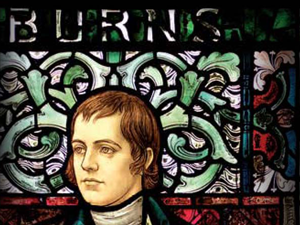 ‘Robert Burns: Poems Songs and Legacy’ is free, and will launch on the 25th of January to mark the bard’s birthday. According to Professor Gerard Carruthers (Lead Educator, Director of the Centre for Robert Burns Studies, and PI for the ‘Editing Robert Burns for the 21st Century’ project): “In the 21st century there is as great a thirst for exploring the works of Robert Burns as there has ever been. At the Centre for Robert Burns Studies, along with numerous outside parties, we are in the thick of all kinds of new research and this course is part of our conversation with the wider world about how we should read Burns in 2016.”

The course has been developed by experts from the University of Glasgow’s Centre for Robert Burns Studies who lead the world in the academic study of the poet, his life and works, the history and culture of the period in which he lived, and his ongoing legacy.

Parts of the course are informed by research undertaken for the Editing Robert Burns for the 21st Century project, and by editorial experience underpinning the new Oxford Edition of the Works of Robert Burns. Furthermore, learners will be able to enjoy several excellent recordings of Burns’s songs, freely available for download from the project website.

Learners will enhance their knowledge of Burns’s reputation as an infamous lover, his activities as a prolific writer and collector of songs, and his skilful use of the Scots and English languages. The course will teach learners how to interpret some of Burns’s most famous works in the context of Scottish History and Culture: among these, the universally recognised ‘Auld Lang Syne’ and the rousing and patriotic, ‘Scots Wha Hae’. Dr Catriona Macdonald (Historian and Course Educator) said: “It is essential that Burns is considered within his own social and cultural milieu, and appreciated as a product of his times and an exemplar – among other things – of the complex and contradictory nature of Scotland’s history.”

‘Robert Burns: Poems Songs and Legacy’ is taught in three units over three consecutive weeks. Each unit takes approximately four hours to complete. Dr Ronnie Young, the Course Co-ordinator, explains: “Each week introduces a new aspect of Burns with different online activities based around major works, broken into individual steps: watching videos, reading poems and articles, undertaking practical exercises, and even transcribing verses from a digitised manuscript. Learners can also listen to Burns’s songs with our Spotify playlist and help track his global reach with our interactive map. It’s an innovative way to teach Burns, reaching out to learners across the globe and enabling them to find out more about Burns as poet, songwriter, and international celebrity in a manner that fits around their other commitments.”

The course has already attracted the attention of a widespread international audience, with almost 6000 people enrolled from countries across the globe. Dr Pauline Mackay (Lecturer in Robert Burns Studies at the University of Glasgow) says of its wide appeal that: “Burns has attracted a worldwide following since the late eighteenth century. This course represents an opportunity for people from countries all over the world to learn about the bard together, to share their knowledge and perceptions of Robert Burns, and to create a better understanding of his life and works by making use of twenty-first century approaches to learning through technology.”

Registration for the course is open now: https://www.futurelearn.com/courses/robert-burns/