Even among Burnsians who regularly handle the standard scholarly sources, few are fully aware just how often the standard sources are themselves derivative and inaccurate.  Even if someone has noted an error, penciled a correction into Egerer or Kinsley or Roy for future reference, or even footnoted it in an article or book, such information has not usually filtered across to affect subsequent scholarship. One of the many justifications for (Re)Editing Robert Burns for the 21st Century is that, along with some major new manuscript discoveries, it involves detailed rechecking of the Burns text and publication history, bringing together new discoveries and neglected older ones in a single authoritative reference. This note, based on one of Ross Roy’s marginal annotations in Egerer, illustrates the need for scepticism in handling the older sources and the extent to which revision is now overdue.

The case in point is the first publication and textual authority for two items, a poem and a letter, that Burns sent to Dr. John Mackenzie: his poetic invitation to a masonic meeting, “Friday first’s the day appointed,” dated from Mossgiel, June 14, 1786 (Kinsley I: 270, K114),  and his letter to Mackenzie, dated from Edinburgh, January 11, 1787 (Letters I: 79-80, letter 73). For the poem, both Kinsley and Egerer attribute the first publication to the Hogg-Motherwell edition of 1834-1836 (Hogg-Motherwell II: 69; Egerer 365b). For the letter, Ferguson, Egerer, and Roy all attribute first publication to Robert Chambers, in his second, four-volume, edition in 1851 (Chambers 1851 II: 28: Ferguson I: 64; Egerer 540b). While manuscripts have been known in the past for both items, and Ferguson had used the manuscript letter, it is not clear that the only reported manuscript of the poem has ever been examined by a Burns editor. No location is currently on record for the manuscript of either item.

However, Ross Roy noted a source that printed  both items decades before either Hogg-Motherwell or Chambers.  Ross Roy’s 4-volume interleaved copy of Egerer, in which for a time he inserted not only notes but photos and Xeroxes of title-pages, is now part of the Roy Collection, University of South Carolina Libraries.  He retained a second working copy at home that he marked up more casually, with a ball-point, to show what he owned, or found out, as buying guide, and when this copy began to fall apart, I had it rebound for him as a christmas present. By agreement, this second Egerer, like his marked-up interleaved Mitchell catalogue from 1959, is currently my own working copy, but both will join the Roy Collection in due course.  His annotations to Hogg-Motherwell, in this second copy, indicate that both items first appeared in The Irvine and County of Ayr Miscellany in 1815.

Inevitably, the Roy Collection has a volume of the Irvine … Miscellany (one of only four listed copies in WorldCat), and the issue for 22 July, 1815, carried this letter (p. 602):

To the EDITOR of the IRVINE MISCELLANY.

SIR,—I herewith send you some Fragments of the immortal Ayrshire Poet, which have never before appeared in any publication. If you deem them worthy of a place in your Monthly Miscellany, they are much at your service.

The Fragments are the letter (pp. 602-603), and poem (p. 603), as subsequently printed by Chambers and Hogg-Motherwell respectively. There seems no reason to doubt that “J. M. S—n.” is the original recipient of both items, Dr John Mackenzie (“Surgeon”), who had settled in Irvine in 1801, as personal physician the the Earl of Eglinton and his family, becoming a magistrate, Provost, and in 1826 the first president of the Irvine Burns Club (see Purdie, McCue and Carruthers, Burns Encyclopaedia, 4th ed., p. 228).  The page with the poem looks like this: 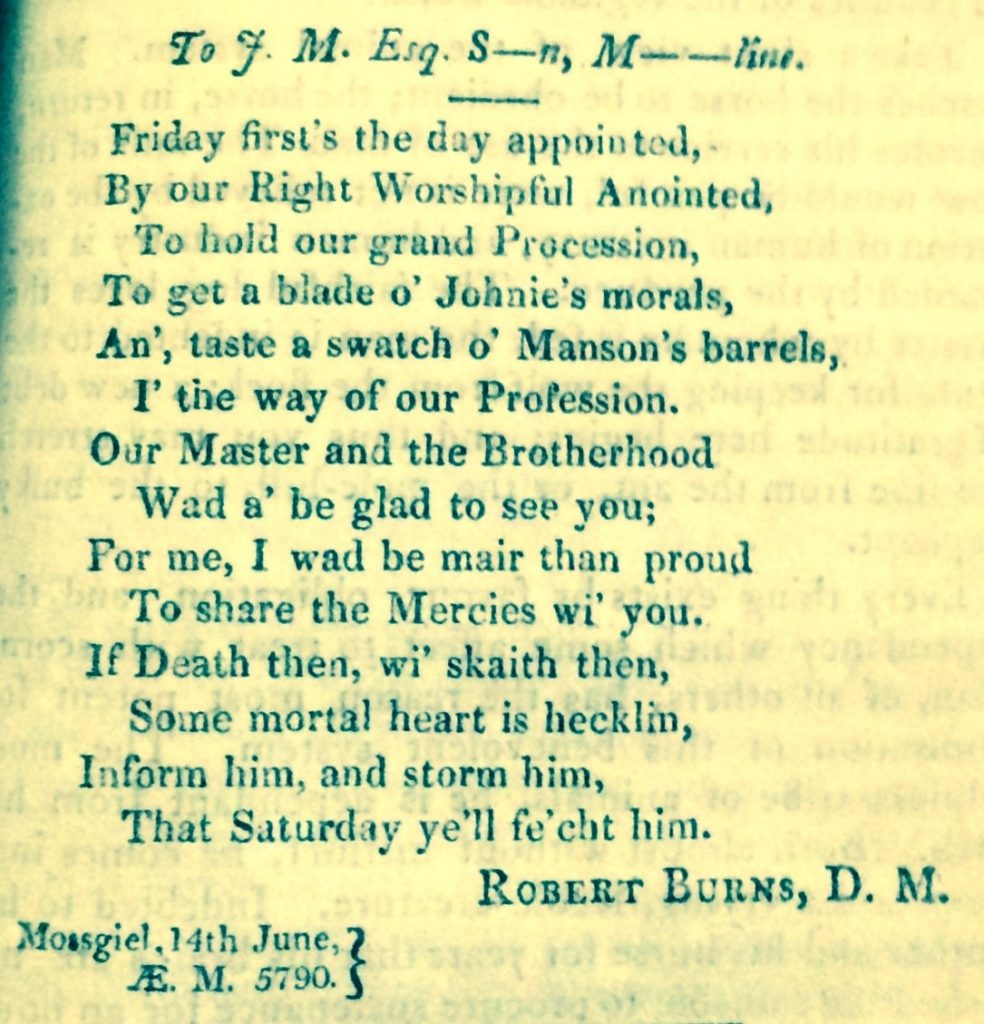 Ross Roy’s handwritten note is not, in fact, the only record of this publication. He was scrupuous in adding typed index cards, or sticking typed post-it notes, into his books as aids or hints for the library’s cataloguers, and entries for the Irvine Miscellany in Elizabeth Sudduth’s printed catalogue of the Roy collection (Sudduth, 2009, p. 57), and more briefly in the University of South Carolina’s online catalogue, record the inclusion of these two items.

What is intriguing, however, is the textual significance of this early printed appearance. No manuscript of either of these two items has been seen by any recent scholar.  For the letter, Ross Roy was probably safe enough relying on Ferguson, who for the 1931 edition had been able to correct the 1851 Chambers text “from the original MS., which was privately owned” (Letters, I: 80n.).  Fergusson’s own note names the then-owner as Sir John Buchanan-Jardine, Castle Milk, Lockerbie  (Ferguson, I: 64n). Sir John (1900-1969), 3rd baronet, had succeeded to the title in 1927. Castle Milk was built for his  grandfather, Sir Robert Jardine, in the 1860s. His son, the 4th baronet, died in 2010.

For the poem, however, the 1815 text retains a special authority.  The only recorded manuscript of the poem is that owned from the 1890s to the 1920s by Robert Borthwick Adam, of Buffalo, NY, but the standard guide to Burns manuscripts gives no location (Index to English Literary Manuscripts, III.iii.178: BuR 1088).  In 1896, when the Adam manuscript was exhibited in Glasgow, it was described as “inserted in a volume of Chambers’s edition opposite the printed copy, which differs slightly from the MS.” (Memorial Catalogue, 1898, p. 154). For their Centenary Edition in 1896 (text, II: 89, notes II: 360), Henley and Henderson, however, used, not the original manuscript, but a copy provided by Adam, “which for the first time supplies the full date, and corrects a few minor inaccuracies” in previous editions. Kinsley also relies on the Adam MS, but most probably via the printed transcript in Autograph Poems and Letters of Robert Burns (privately printed, 1922, p. 41).  Unfortunately, at least one other item Adam proudly transcribed as authentic in Adam’s Autograph Poems, and that Kinsley collated from there for the Clarendon edition, has since turned out to be an Antique Smith forgery (see SSL, 43.1 [2017), 143-145). The Rosenbach Library in Philadelphia has no record of “To Dr. John Mackenzie” being among the Burns manuscripts Adam sold to Dr Rosenbach in 1924, but a short Masonic poem of this kind, if genuine, would surely have cropped up in the market sometime in the ninety-plus years since Adam dispersed his collection. Till the Adam manuscript itself turns up, prudence suggests the source closest to Burns may be Dr Mackenzie’s own text, in the Irvine Miscellany.

This is of course just one new source, correcting errors now needing correction in just one letter and one fairly minor poem. It is discussed here at length because it is a symptom or a clue to why the long-standard scholarly sources really do now need a thorough, large-scale overhaul. If we have a shaky textual basis and incorrect first-publication dates for these two items, how much more misinformation about how many more of Burns’s poems, songs and letters has been repeated from editor to editor over the years?  As the published volumes of the new edition roll out from the Glasgow project, Burnsians and others who write about the poet will have less and less excuse if they go on repeating and reprinting the errors of the past.