Guest Blog by Professor Patrick Scott: A Burns Antedating and Another (Mis)Attribution: Hogg, Cunningham, Monk Lewis, and “The Hermit”

Every early 19th century Burns editor, and every publisher of a Burns edition, took pride in turning up previously-unknown Burns poems and letters. Egerer’s bibliography highlights this process of gradual discovery or recovery by listing under each new edition the items that first appeared in it.  In the early 19th century, in Currie and Cromek, most of the items added were genuine enough, but later additions have proved more debateable. Scepticism is especially in order if a poem not published by Burns himself is not mentioned in Burns’s letters and if there seems to be no surviving manuscript in his handwriting. Yet the winnowing process often seems to draw only intermittent attention, and many poems from the Burns apocrypha get too little scrutiny ever to be definitively dislodged.

Among the poems that Egerer records as first published in the 1830s in the Hogg-Motherwell edition is a poem I confess I’d never noticed, ‘The Hermit’ (Egerer p.  167, entry 365b: Hogg-Motherwell, Works of Burns, II [1834]: 48-50).  This is a poem, which is variously titled by different editors, in more or less the standard habbie, but equally in standard English, of nine stanzas, beginning:

Think not, though from the world receding,

I joy my lonely days to lead in

That with remorse a conscience bleeding

The above lines, which have not appeared in any edition of our author’s works, were written on a marble side-board, in the hermitage belonging to the Duke of Athol, in the wood of Aberfeldy. We are indebted for them to Mr. Peter Buchan, Aberdeen.

As Ross Roy would have said, any sophomore can tell it’s not Burns, and the marble side-board sounds a bit much for even a ducal hermitage, but other circumstances are not on the face of it implausible. Burns had visited Aberfeldy, had gone to the nearby hermitage, and had written a different poem about it in pencil on a chimney-piece.  Buchan was already well known as an avid antiquarian, and indeed would take over finishing up the Hogg-Motherwell Works when the original editors died.

Rival Burns editors didn’t want to be caught napping. Robert Chambers included the lines in his 1838 edition, with a letter-key in the contents list acknowledging them as first printed by Hogg-Motherwell, and an explanatory subtitle: ‘The Hermit. Written on a Marble Side-Board, in the Hermitage Belonging to the Duke of Athole, in the Wood of Aberfeldy’ (Poetical Works of Robert Burns, Edinburgh: Chambers, 1838, 69-70). The verses had not appeared in Allan Cunningham’s 8-volume edition (1834), but he made sure they appeared in the one-volume version that soon followed, with The Hermit in black-letter, the subtitle as in Chambers, and his own brand-new footnote about its authenticity and prior publication:

*[This beautiful poem first appeared18 in Hogg and Motherwell’s edition of the Poet’s works, on the authority of Mr. Peter Buchan, Aberdeen. It had previously been published fugitively, and there is no doubt of its authenticity. It also appears in Mr. Robert Chambers’s edition.

The biggest-selling Victorian Burns edition, the Blackie Works, which repackaged John Wilson’s Essay and D.O. Hill’s illustrations from The Land of Burns with a slightly-amplified version of Chambers’s 3 volumes from 1838, and which went through at least 18 printings over the next 40 years, also included ‘The Hermit’, which it credited to Hogg-Motherwell and Buchan, but also noted it ‘formerly appeared in some fugitive publication’ (Works, Blackie, 1842, II: 90).  The verses retained their place in Robert Aris Willmott’s Poetical Works of Robert Burns (London: Routledge, 1866), pp. 223-224, and in William Gunnyon’s Complete Poetical Works (Edinburgh: Nimmo, 1867), p. 52.

The enthusiasm tapered off, however. By 1852, Robert Chambers had moved the poem to an appendix header of ‘Pieces Doubtfully Attributed to Burns’ (Life and Works, Edinburgh: Chambers, IV: 294; cf Chambers, Library Edition, 1856, IV: 296). I couldn’t find the poem in Waddell or Gilfillan. In 1871, Scott Douglas also relegated it to an appendix as ‘The Hermit of Aberfeldy’, with the comment that ‘Very few readers of Burns can be persuaded’ it was written by him (Kilmarnock Edition, 2 vols, Kilmarnock: M’Kie, 1871 etc., II: 376).  I didn’t find in any of the late Victorian big three Burns editions, Scott Douglas’s 6-volume version, Chambers-Wallace, or Henley and Henderson. James Mackay included it in his Burns A-Z (Dumfries: Mackay, 1990), p. 239, from the Wilmot edition, among the Dubious and Spurious in his Appendix B, but Kinsley omitted it, not just from Dubia, but even from his last briskly-dismissed short entries for ‘poems … admitted at various times to the canon of Burns’s work, either wrongly or on inadequate evidence’ (Kinsley, II: 917).

Of course, the verses are not by Burns, and they were not first published in 1834.  As Cunningham’s footnote says, they had been circulating long before in fugitive publications; for instance, I came on them by accident this past weekend, attributed to Burns, in a Dorset magazine, the Weekly Entertainer: or Agreeable and Instructive Repository, 53 (20 September, 1813): 753-755.  The Weekly Entertainer was compiled from other papers, so I’m sure it was not the only such appearance. And Cunningham’s instant praise for the poem’s beauty and authenticity also aroused my suspicion.  I was not surprised to find, from James Gibson’s Bibliography of Burns (Kilmarnock: M’Kie, 1881), p. 134, that the poem had also appeared as ‘Original Verses by Burns … which have not appeared in any edition of their author’s works’, in The Nithsdale Minstrel (Dumfries: C. Munro for Preacher & Dunbar, 1815), pp. 97-99, among whose other contributors was Allan Cunningham’s brother, Thomas.  Notoriously, R.H. Cromek had told the young Allan Cunningham that ‘no one should try to write Songs after Robert Burns unless he could either write like him or some of the old minstrels’, a challenge that led Cunningham to write many of the ‘old songs’ he allegedly collected from the area and that Cromek published as authentic in his Remains of Nithsdale and Galloway Song (1810).  And it had been James Hogg, in Jacobite Relics (1819), who broke the genteel silence about Cunningham’s role, commenting that another song ‘is not very ancient, as it bears strong marks of the hand of the ingenious Allan Cunningham’ (see Dennis M. Read, R.H. Cromek, Engraver, Editor, and Entrepreneur, Farnham: Ashgate, 2011, pp. 128, 136).

Alas, though I still suspect Cunningham of being somehow behind ‘The Hermit’ being foisted on the Hogg-Motherwell edition, he was not responsible for writing it.  That honour goes to Matthew  (‘Monk’) Lewis (1775-1818).  The verses appear early in his Gothic novel, The Monk (1796), vol. I, ch. 2, when the abbot discovers the disconsolate novice Rosario in a rustic hermitage, who ‘pointed to a marble tablet fixed against the opposite wall’, on which were engraved ‘the following lines:— INSCRIPTION IN A HERMITAGE’. What follows is the full poem later attributed to Burns.

Thus far I had got myself, when, as in similar hunts before, I saw belatedly that the redoubtable Davidson Cook had got there first, and gone further.  Cook had long been certain that ‘The Hermit’ was not Burns and had been annoyed by his inability to pin down its origin, until ‘one lucky day’ when he ‘picked off a book-barrow in Manchester’ a Victorian biography of Lewis, identified Lewis as the writer, and wrote up the story of his hunt in an article in The Bookman, 85 (December 1933): 402-403. Cook’s article added three significant items to what I had found out.  First, despite Egerer, Hogg-Motherwell was not even the first Burns edition to include the poem: that honour or blame goes to The Poetical Works of Robert Burns; including several valuable pieces not published in the Original Editions of his Poems (Newcastle-upon Tyne: Mackenzie and Dent, 1818, reprinted 1821 and 1826; no previously-unpublished material noted in Egerer, p. 134, item 209). Second, that book off the Manchester barrow let Cook confirm that the poem in The Monk was indeed by Lewis himself, because Lewis had included it in a letter to his mother, dated 22 November, 1794 (Life and Correspondence of M.G. Lewis, London 1839, p. 138).

Third, and most important, Cook found out how the poem had been misattributed to Burns in the first place.  Very soon after publication, ‘Inscription in a Hermitage’ had been reprinted in a Brash and Reid chapbook, The Exile of the Vanished Patriot: A Poem (Glasgow: Brash and Reid, [1798]: Poetry Original and Selected, III, item 12), where it appears as the second item (pp. 5-7), headed ‘Inscription Engraved on a Marble Table, fixed against the Wall of an Hermitage’.   Lewis’s marble tablet had become a marble table and thus in due course that improbable side-board.  Both the first and second items in the chapbook were by Lewis, and the first, though not the second, is credited in the contents page for Poetry Original and Selected to ‘the Author of The Monk, A Novel’.  However, neither Lewis’s name nor The Monk appear on the chapbook itself, in which the third and final item was Burns’s song ‘The Lovely Lass of Inverness’ (Scots Musical Museum, 5, 1796, song 401: Kinsley, II: 831, see also Pittock, OERB, III: 149). As Cook realized, the misattribution started from the ambiguity of the chapbook title-page: 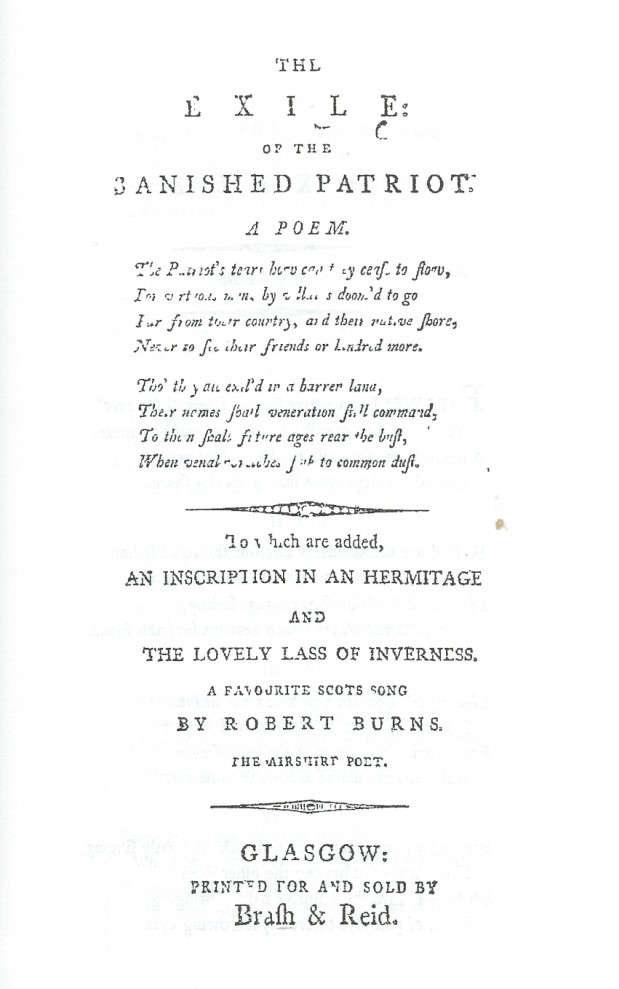 One item was the featured title, and the other two, the Inscription and the Burns song, were grouped together as bonuses (‘To which are added’), with Burns’s very marketable name prominent below the song title, where it could easily, perhaps intentionally, be misread as applying to both.

I have commented elsewhere that one of the biggest difficulties for Burnsians is finding out what is already ‘known’.  As the Egerer entry for ‘The Hermit’ shows, even the standard modern scholarly Burns reference tools have carried forward a surprising number of errors from earlier sources, years after the facts have been established.  On the canonical Burns texts, the Glasgow project, and the resulting Oxford edition, will soon provide the most up-to-date and comprehensive reference point for finding relevant sources and scholarship on particular issues, but most professional scholars have little incentive to root around researching poems or songs long regarded as apocryphal.  Articles like Cook’s, from 1933, in a non-Burnsian periodical, seem particularly invisible to later scholarship, and Cook’s scattered publications, in particular, done in his evenings and days off from working at the Bradford Co-Op, still have much hard fact available nowhere else.  Tribute where tribute is due.