A recurrent issue in textual work on Scottish poetry is linguistic authenticity. Scottish literary texts, even in the author’s manuscript, can show considerable linguistic variety and eclecticism, but printers also vary widely in how faithfully they reproduce the authorial text and how much they normalize it.  The issues can be seen most starkly when an English printer clearly misunderstood the Scots text in front of him. The errors need to be put right, but modern editors are uncomfortable with changing things just by instinct.

An example is the short poem, ‘Epitaph on a Miser’, which Burns himself had forwarded to London for publication in Peter Stuart’s Morning Star. It duly appeared in the Star alongside Burns’s own ‘Ode Sacred to the Memory of Mrs. Oswald’,  on 1st May,  1789, and Burns must have felt Stuart was implying it was his poem.  He wrote almost immediately to explain: ‘The Epitaph is not mine. I must beg of you never to put my name to anything I send, except where I myself set it down at the head or foot of the piece’. (Letters, I: 409; OERB, I: 294).  The ‘Epitaph’ is not further identified either by Ferguson or Roy.  William Wallace (who first published the letter, in 1896) looked up the Star, discovered the poem was signed there with the initials ‘G.T.’, and quite reasonably conjectured that it might be by Gavin Turnbull (Chambers-Wallace, III: 56; OERB I: 412, n. 47).  Annotation of this kind is one of the ways the new Correspondence volumes will be adding to the previous Clarendon Letters.

In 1789, Gavin Turnbull (1765-1816), a younger contemporary of Burns, had just published his first book, Poetical Essays (Glasgow, 1788), but the 1788 preface implies that he had already left Kilmarnock, and by April 1789 Burns seems to have lost contact with him (Letters, I: 399, 413).  Turnbull’s known friendship with Burns only resumes when he was with the Dumfries theatre in 1793-1795. In 1793, Burns copied out three of Turnbull’s songs to send to George Thomson for his Select Collection, though Thomson never used them (Letters, II: 256-257). Turnbull didn’t include ‘Epitaph on a Miser’ in his second book (Dumfries, 1794), or reprint it in America, but it will be added to the online edition at the next updating. It is a fascinating clue that Burns’s encouragement continued in this ‘lost’ phase of Turnbull’s life, and it’s a nice addition to the Turnbull oeuvre.

But Turnbull’s ‘Epitaph on a Miser’ also illustrates the textual difficulties of relying on newspaper texts. Indeed it makes a nice test or puzzle for the old-fashioned skill of ‘conjectural emendation’, in situations where the text being corrected is a printed version of spoken Scots. Here’s how Turnbull’s poem looked when it was first printed, in Stuart’s Star: 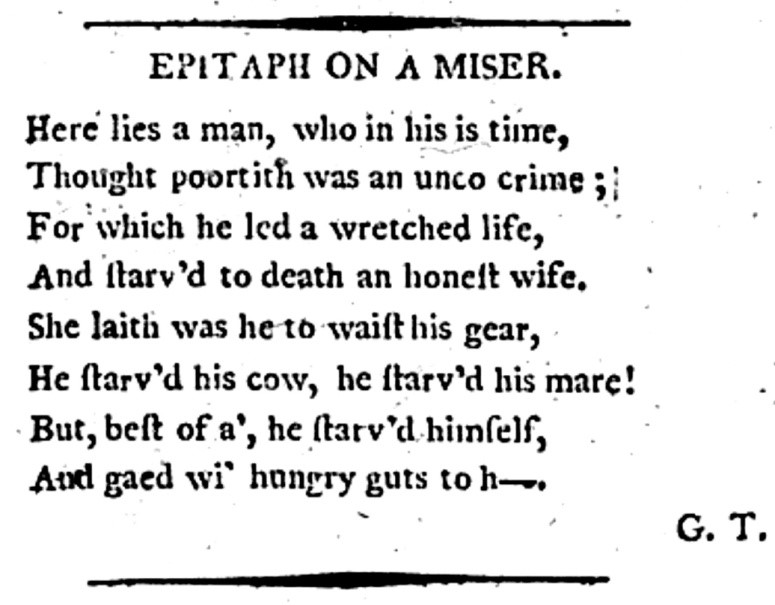 Try it yourself, without cheating by looking further down this page. The problems only start with the misprint in line 1 (delete ‘is’).  Even after Burns’s success, the London compositor might well have struggled when faced with the words poortith [that is, puirtith, poverty], unco (line 2), laith, gear (line 5), and gaed (line 8).  Perhaps he made a special effort to print unfamiliar words accurately, or perhaps he checked them with his Scottish-born editor. But when he relaxed, he normalized, as in printing himself (line 7), not himsel’ as the rhyme demands.  And line 5, She laith was he to waist his gear, is grammatically impossible, even though the general sense is clear enough: it was he, not she, who was loath to waste his wealth. Try as one will to imagine She as an awkward substitution for her, it still seems improbably awkward given the neatness of the other lines.  The simplest emendation would be Sae [=So], which was easily misread from manuscript as She by the English compositor.

This conjecture is confirmed in the poem’s next appearance. That same month, now headed ‘Epitaph. By a North Briton,’ it crops up again in a second London-based periodical, again with Scottish connections, The Freemason’s Magazine, IV (May, 1789), 348, but this time with no error in line 1, Sae in line 5, and himsel in line 7.  It also has geer, not gear, in line 5, and lacks the exclamation mark on line 6. 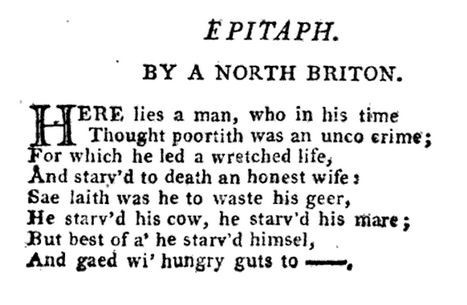 The third London appearance of the poem was two months later, in Alexander Hogg’s New Monthly Magazine, V (July, 1789), p. 358, and again in close juxtaposition to a Burns attribution (as shown in the catch-line following the text): 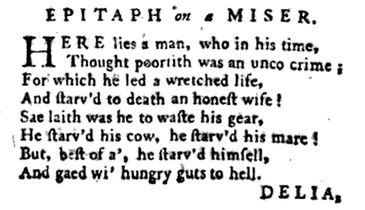 This third printing omits both initials and pseudonym, spells out the last word, has two exclamation marks, not just one (lines 4 and 6), reverts to the spelling gear for geer in line 5, and restores the original title. In the most important variants, the New Monthly version is closer to the Freemason’s Magazine, but in some details it seems to have some connection with the Star text.

What is the relationship among these texts, and how would a modern editor deal with them? If only the first one had survived, would modern editorial practice have discouraged conjectural emendation, and how confident would modern editors be in doing it? We know that the first text in the Star came from the manuscript sent by Burns; the major textual errors in the Star must be the London printer’s, not Burns’s, but given Burns’s practice in other letters he may well have copied Turnbull’s poem into his own letter, rather than enclosing Turnbull’s own autograph copy.  If that’s the only version that went to London, where did the correct readings in the other two printings come from? Perhaps, one wonders, Turnbull, or another Scottish Masonic friend, had sent a second another manuscript copy to the Freemason’s Magazine, or perhaps the Freemason’s Magazine compositor, if working from the printed Star text, could simply have guessed the corrections that needed to be made.  But the simplest explanation would be that the manuscript Burns sent was passed from the Star to the Freemason’s Magazine, where it was printed more carefully.  And what of the third printing, in the New Monthly, and the odd details in which it is closer to the Star than the Freemason’s Magazine?  It seems farfetched to imagine the New Monthly’s compositor carefully marking up printed copy from the Star with the substantive variants from the Freemason’s Magazine.  Again, the simplest explanation is surely that the same manuscript, Burns’s manuscript, was passed along a second time, and that the New Monthly compositor also set it carefully, but made fewer presentational changes (title, punctuation) than the Freemason’s Magazine.

Turnbull’s ‘Epitaph on a Miser’ is a modest addition to the oeuvre of a relatively peripheral Scottish poet. But it further documents the connection between Scottish poets and the London newspapers in the late 1780s, and it illustrates neatly the potential problems if a modern editor were to rely on ‘the first published text’, without emendation, when the original English printer was setting a manuscript in Scots.  The same compositors were printing Burns’s own poems when he sent them for publication in London newspapers.