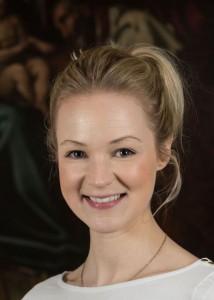 Jennifer Falconer Hall is an English ‘cellist. Born in Bristol, she began her studies at the age of 9 under the tutelage of Avril Rump. During her school years she was a member of the National Youth Chamber Orchestra and left in 2009 as principal cellist to attend The Royal Conservatoire of Scotland.

Here she attained her BMus degree with Honours in 2013 with Rudi de Groote, and is now studying with Alison Wells, Alison McGillivray and David Watkin for a Masters degree for ‘Cello and Baroque ‘Cello performance. She has had the honour of being chosen number of times to take part in the RSNO side by side scheme, most recently sitting Principal under the guidance of Aleksei Kiseliov and has worked a number of times with Nicola Benedetti on the “Benedetti Sessions”. In 2013 she was awarded the Apprenticeship Scheme from the Scottish Opera. Her masterclasses include those with Peter Wispelwey, Erkhi Lansmhar, Professor Heidi Listaucher, Raphael Wallfisch, David Watkin and Aleksei Kiseliov.

This year Jennifer was invited by the BBC Scottish Symphonietta to take part in a series of chamber recordings of Stravinsky for which she played principal cellist, and her quartet ‘Rosignol’ have been selected to compete in the prestigious Richard Carne Trust Competition 2015 in London.

Her solo recitals are numerous including performances in Bristol Cathedral, St Georges Concert Hall, the Royal Conservatoire of Scotland, Edinburgh Cathedral and the Belgravia Music Rooms in London. She performs regularly at the Edinburgh Fringe and her upcoming performances include the Schumann ‘cello concerto in April 2015 with the Orchestra of the Royal Conservatoire of Scotland, and a solo recital in May 2015 in Glasgow.

In 2009 Jennifer was given the prestigious position of City Waite in Bristol, and has recently been awarded the third prize in the John McInulty Prize for Orchestral String Playing.