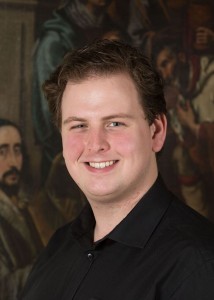 Jonathan Graduated with a BMus (Hons) from the Royal Conservatoire of Scotland in June 2015.

He was privileged to sing with the RCS Chamber choir in every year of his studies at RCS. He was also in the Chorus for a number of Operatic productions such as; Betrothal in a Monestary, Die lustige Weiber, La Clemenza di Tito, La Rondine and Dido and Aeneas. In his second year, he won first place in the ‘Jean Highgate scholarship for singing’ at RCS.

On the concert platform, he has sung as the soloist for; Faure’s Requiem, Bach’s Coffee Cantata, Bruckner’s Abendzauber and Beethoven’s Missa Solemnis. In November, Jonathan will be Bass soloist for Handel’s Israel in Egypt with the City of Glasgow Chorus.

In September, Jonathan will be continuing his studies at RCS on the MMus programme under the tutelage of Alan Watt.