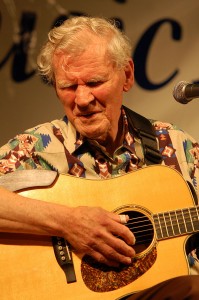 American Folk musician ‘Doc Watson’ was born Arthel Lane Watson on 3rd March 1923 in Deep Gap, North Carolina. As a young boy, he was struck by an illness that restricted the blood flow to his eyes, resulting in blindness.

Yet that didn’t stop his rise to fame as gravel voiced guitar-picker; eventually picking up several Grammys for  his unique blend of country-fused Americana.

So what does a North Carlolinan guitar-picker have to do with Robert Burns, you might ask? Well, here goes the story.

Take a listen to Doc Watson’s famous 1977 rendition of ‘A-Roving On A Winter’s Night’, taken from the album Tradition. The Southern drawl, country twang and talk of ‘drinkin good ol’ wine’ smacks of the rural Appalachian landscape on a balmy summer evening.

The song itself has come to be considered a classic American folk song, usually archived or listed under ‘Appalachian’ or sometimes ‘Virginian’ in catalogued folk collections. Like most folk songs, there’s been countless renditions, adaptions and variants over the years. Not one writer is credited with penning it, but rather, it’s been passed down generations through oral and musical means, no doubt on many a balmy evening ‘drinkin good ol wine’.

But this particular song’s roots are quite clear.  The lyrics and rhyming pattern stem directly from Burns’s ‘My Luve is Like a Red Red Rose’.

Take one of the verses from ‘A-Roving On A Winter’s Night’:

I love you till the sea runs dry,

And the rocks all melt in the sun.

I love you till the day I die,

Though you will never be my own.

Till a’ the seas gang dry, my dear,

And the rocks melt wi’ the sun:

I will luve thee still, my dear,

While the sands o’ life shall run.

Even more interestingly, there’s a rare a cappella field recording (housed at The Library of Congress’s American Folklife Centre) dating back to the 1930s containing the same lyrics, albeit sung in a more haunting, gospel tone.  The 30s field recording differs from the Doc Watson version, but still has strong resonances with Burns’s 1794 song.  It’s a poignant example of a folksong traveling through time, being re-imagined, re-worked, transformed by new people in new places as they move and evolve into divergent cultures.

Of course, the popularity of Scots songs in America preceded Burns, and many of them arrived on American shores via the lips and fiddles of the early Scottish immigrants, rather than on the printed page.  Like old stories, songs were passed down from one generation to another – as was the case with the above song as it transformed throughout centuries.  Quite often, songs evolved into new variants, particularly in the Appalachians where the landscape and culture, perhaps, lent itself aptly to some of the haunting Scottish melodies.

Yet while songs like Doc Watson’s ‘A-Roving On A Winter’s Night’ and countless others have their roots in a distinctly Scottish tradition, it’s not always obvious to the listener, and tracking down variants and the genealogy of a song can be difficult.  Especially when titles, lyrics and melodies transform throughout the ages.  For example, variants of ‘A-Roving On A Winter’s Night’ might be listed as ‘As I Rove Out’, ‘A Winter’s Night’ and of course, ‘A Red Red Rose’.  It can be quite a confusing process to track the evolution of one particular song.

Which makes it all the more rewarding and serendipitous when you do see, hear, or even feel, that link between musical folk traditions.