An endemic problem in Burns research is that manuscripts go missing.  Earlier editors or auction catalogues list a manuscript that cannot now be located.  Sometimes it has simply disappeared into private ownership, sometimes a manuscript will belatedly resurface, and sometimes previous information was faulty.  These ghosts can haunt the footnotes of Burns scholarship for decades, with no Burns scholar willing to say boo in case the ghost is real.

The most comprehensive guide to Burns manuscripts is still the Index of English <sic> Literary Manuscripts, edited by Margaret Smith and Penny Boumelha (London: Mansell, 1986), now over thirty years old.  Among the items that the IELM compilers could not locate was an autograph manuscript of Burns’s ‘The Chevalier’s Lament’.   It is listed there as from a ‘letter to James Maitland, 26 May 1788’, citing lot 639 and a facsimile in a Sotheby’s auction catalogue for 19 March 1930 (IELM, vol. III, part iii, p. 169; BuR 955).  In that period, newspaper reports and the annual Book Auction Records would often say who bought an item, but in this case IELM notes ‘no buyer listed’.  It is unmentioned in J.C. Ewing’s ‘Burns in the Auction-room’ lists covering 1930 sales in the relevant Burns Chronicles.  It’s a loose end that I hadn’t bothered to chase up a couple of years ago when I was researching a newly-discovered broadside of the same song (‘Burns and Broadside Publication’, Robert Burns Lives!  ed. Frank R. Shaw, Nov. 2016: https://www.electricscotland.com/familytree/frank/burns_lives247.htm).

Quite by chance this past week, I was looking through some of J. DeLancey Ferguson’s old files. Tucked inside some much larger photos of slightly-suspect looking Burns manuscript materials was a much smaller yellowed sheet, with what turned out to be the 1930s Sotheby’s catalogue description, including a facsimile, which Ferguson had annotated: 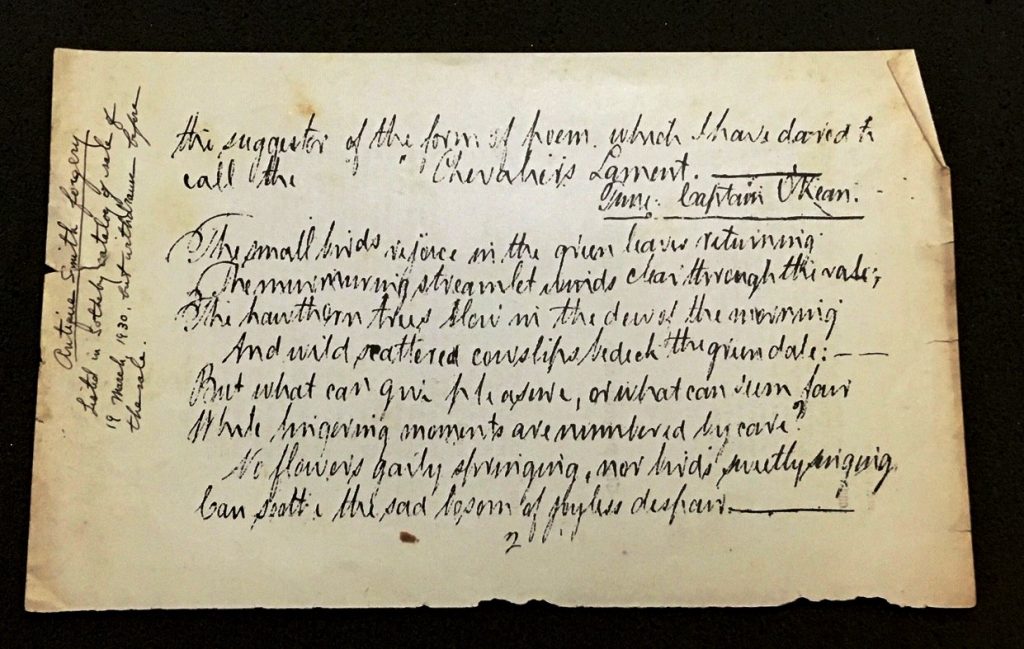 As soon as you see the facsimile, the answer is obvious.  The manuscript disappeared because it was a fake.  Partly because of Ferguson’s own research on the Edinburgh forger Antique Smith, any Burns scholar now will recognize it a Smith forgery. Ferguson’s annotation confirms this and explains why no buyer was listed.

That ghost is laid, but only by the chance preservation of a random catalogue page in old files from a scholar who died in 1966.  In 1930, neither Sotheby’s nor the previous owner (‘P.J.H. Gaisford, Esq., of Edinburgh’) recognized Antique Smith’s hand. Ferguson didn’t use this example in his article about Antique Smith the following year (see note below), and no recent editor has followed up the IELM entry and looked for the catalogue facsimile.

But any alert reader should also have caught the forgery from the previous catalogue page, which describes the letter containing the song as sent from Mauchline, on 26 May 1788, to a Mr James Maitland, of Stranraer, and describes the MS poem as having 16 lines, that is both stanzas.  In 1930, Sotheby’s cataloguer proudly noted that ‘The prose of this letter would appear to be unpublished’.  In May 1788, Burns was certainly in Mauchline, dating letters from there on 25, 26, and 27 May, and moving to temporary accommodation near Ellisland only on 11 June. Nonetheless, and unsurprisingly, given Ferguson’s response to the auction, the letter was omitted by both Ferguson in 1931 and Roy in 1985, and this James Maitland is unindexed in either edition, as also in the Currie/Ewing inventory of letters written to Burns.

The giveaway part of the letter is in its final sentences, printed in the catalogue as follows:

‘I send you one of my latest effusions. I have sent it to Mr Cleghorn and intend that Mr Thomson should have some interest in it. Mr Cleghorn was the suggestor of the form of Poem which I have dared to call the Chevalier’s Lament’.

The second, and more damning, error in the letter is the reference to Thomson. Thomson was indeed the first to publish the song with both stanzas, at least in an authorized edition, in his Select Collection (1799), but Burns only began to correspond with him in September 1792 (Roy, Letters II: 148).  In May 1788, if Burns had mentioned interesting someone in a new song, it should have been James Johnson.  Antique Smith had made an obvious mistake, not in orthography, but in the letter’s content.

It is easy to think that all these ghost manuscripts can be dismissed as fakes. That is not true.  Long-lost genuine Burns manuscripts still occasionally turn up.  Occasionally, what later turn out to be genuine manuscripts have been misidentified as fakes. Changing standards of documentation means that it is often difficult to match older records with current descriptions, so that a manuscript “not located” by IELM may in fact be identical with one separately and more accurately described in an adjacent entry.  There is a lot of Burns manuscript material that has never been examined by recent scholars.  For example, in 1968, for “The Chevalier’s Lament,” Kinsley knew of or used only three of the six manuscripts that Smith and Boumelha would list in 1986 (BuR 951-956).  Though BuR 955 can now be marked off as an Antique Smith forgery, it would be risky to assume the same about another ghost, BuR 952, exhibited in Glasgow in 1896 on loan from the Earl of Rosebery, and last documented in the Memorial Catalogue (Glasgow: William Hodge, 1898), p. 164, item 1105.  There is nothing in the public record about the number of stanzas in the Rosebery manuscript, its earlier provenance, or its present whereabouts.  Lord Rosebery certainly owned Antique Smith forgeries, but when he loaned one for the 1896 exhibition it was clearly labelled as a fake (Memorial Catalogue, p. 430, item 1420B), and BuR 952 was not. Even after more than a century, no one should bet against BuR 952 and other unlocated items turning up, or against some being genuine.