Picking Up the Pieces: A Burns Letter and the Legacy of Autograph-Hunting

Many Burnsians do not realize quite how much of what they read rests, not on original manuscript evidence, but on earlier and now unverifiable printed sources.  Sometimes no modern editor has ever seen a manuscript for the item in question, and sometimes a manuscript seen in the past can no longer be traced.  The number of such items rediscovered by the Glasgow edition will, I think, surprise most informed researchers, but the rediscoveries may pass unnoticed or be taken for granted by the average reader. The problem is compounded where, as sometimes happens, a letter or document has been cut up to provide autograph hunters with collectible snippets of Burns’s handwriting. Fragments of documents are much less likely to be properly catalogued by libraries or trackable through auction or sales records than are complete Burns manuscripts.

This week, because I was interested in one such fragment, I followed on line the auction in Edinburgh of a substantial group of Burns manuscripts (Lyon and Turnbull, 17 June 2020). Along with several important complete letters and a short poem, there was a 4-line fragment from the end of a Burns letter, with an attractive signature (Lot 188). The auction catalogue quoted (and illustrated) a later endorsement in another hand stating that the fragment was ‘part of a letter written by Burns [in] the Poet’s own hand, and address’d to Mr Robt Ainslie Writer Newtown Edinr dated Dumfries 16th Oct 1788’.  Further endorsement on the verso of the fragment traced its ownership through two aristocratic Victorian ladies. At some point the fragment and its precious signature was pasted into an album.

What happened to the rest of the letter? J. DeLancey Ferguson’s Letters of Robert Burns (1931) was the first Burns edition to include Burns’s letter to Ainslie postmarked Dumfries 18 October [1788], in which Burns admits that farming Ellisland was proving difficult but sees a way out: ‘I have my excise commission in my pocket’ (Ferguson I: 266). Ferguson described the letter as an ‘unsigned fragment’ that he had printed from ‘a photostat of the original’ supplied by the then-owner ‘Mr. Templeton Crocker of San Francisco’.  He also notes that the fragment was ‘inserted in a copy of the first Edinburgh edition’, though he doesn’t note that it was Robert Ainslie’s copy, with Burns’s annotations filling in the asterisks in the kirk satires, so with a well-documented history at auction.  Crocker died in 1948, and, though Roy’s source-note says ‘Here collated with the original MS’, he does not say who owned it (Roy I: 329).  He does however add to Ferguson’s annotation a note that ‘The letter has been docketed in another hand ‘Dumfries 16 Octr 1788’.  Neither Ferguson nor Roy note that Ainslie’s full Edinburgh address, ‘Care of Mr. Ainslie Bookseller, Newtown, Edinr’ and his instruction ‘To be forwarded wherever he is’ come on the verso, not at the head of the letter as they appear in the Clarendon editions. Over twenty years later, Ross Roy himself bought Ainslie’s 1787 edition, which is now in the Roy Collection, and with it the manuscript of Burns’s letter.  A description is given in the published catalogue (Sudduth, 2009, 4-5, 21-23), and in the University of South Carolina on-line catalogue, and the letter has been digitized at: https://digital.tcl.sc.edu/digital/collection/rbc/id/971/rec/4. 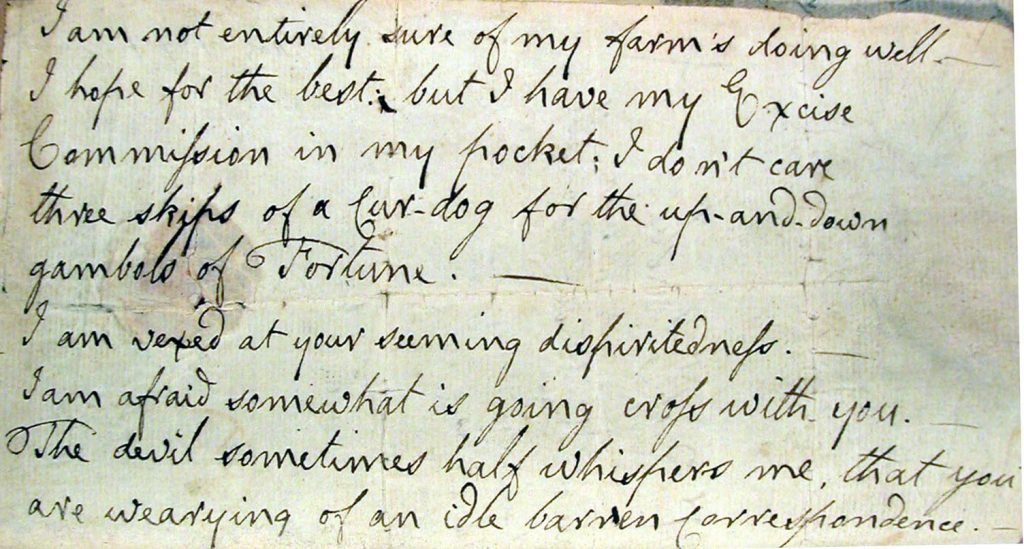 Courtesy of the Roy Collection, University of South Carolina Libraries

The sale this week therefore offered the first chance in some 150 years or more to read the two fragments together.  Until it was quoted in the auction description, the ending section had never I think previously been published.  Since the Roy portion starts without a salutation or date, it is by no means certain that even the two parts together constitute the whole of the original letter; the direction of writing on the concluding fragment (which is not of course the verso of the Roy letter) indicates that there must have been another sheet.  Ainslie was very protective both of Burns’s letters and of his own reputation; it was after his death that most of what survives leaked out into the market and so, eventually, into Burns editions. If this letter is indeed still incomplete, it is quite possible that we should blame Ainslie himself, rather than the aristocratic autograph hunters, for the dismemberment of the letter.

I had hoped that the sale this week might let us reunite the two extant portions of the manuscript, bringing both together in the Roy Collection. The library here put in a good bid, well above what the auction house had estimated, but someone else also wanted it and was prepared to bid higher.  Disappointing, but not devastating. The sale itself advanced knowledge, if only by a small increment. Something can be learned every time an auction brings into public sight some of these lost fragments of the Burns record.