We moved east towards Elgin, where we visited the cathedral. Burns visited herel on the 7th of September 1787 and he notes that is has ‘a grander effect at first glance than Melrose but nothing near so beautiful’. Burns compares the view to Melrose, where he visited during his earlier Border tour – a luxury we cannot afford partake in at the moment – but for us the cathedral looked quite dramatic, possibly aided by a striking skyline. 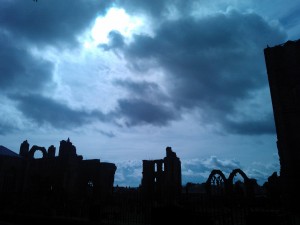 The cathedral was founded in 1224 and it still stands in the form of picturesque ruins. Johnson, in the journal of his and Boswell’s tour (earlier than Burns’s ) takes the opportunity to comment on the ruins marking the “waste of reformation”, but does concede that there is enough remaining to show that “it was once magnificent”.

After the cathedral we continued onto Duff House and Banff. The lavish grounds and well kept gardens we encountered upon approaching Duff House provided remnants of a time when it was home to James Duff of Braco, Second Earl of Fife. Although Burns did not meet with Fife, he spent some time exploring the interior of the mansion which included (and still includes) various paintings of the Stuart family in the drawing-room. While to the modern visitor the gardens can still evoke a sense of rural, romantic simplicity, it’s interesting that Burns, once again (ironically for the ‘romantic’ poet), was more interested in the agriculture of the surrounds,:

Burns’s description of the crops is consistent with many of his other reflections in the Highland Tour journal. It is not the elaborate house that takes priority in Burns’s entry, but farming practices, agriculture and, in particular the notion of ‘improvement’. As we moved onto Banff and, this came to be the case once again:

‘breakfast at Banff improvements over this part of the country – plenty turnips, wheat, horse-hoed mail, cabbages’

Of course, it’s important to remember that not all of the journal entries are reflections on agriculture. There is, as we have noted, a pervading engagement with history (in particular jacobitism), song, and the tour also provides Burns with creative inspiration – both as a poet and a somng collector. However, these agricultural reflections are vital if we are to understand both the journal, and Burns himself, in a more nuanced manner.

‘RB is more concerned to note the agricultural condition of the land, rather than the aesthetics of the landscape, in line with his training as an improving farmer[…]At times his prose notes read like one of the County Reports submitted to the Board of Agriculture’

Thus, though often sparse in language and description, these journal entries do have the effect of helping to build up a better idea about Burns and his thought process on the Highland Tour.

We continued South to our final resting point of Aberdeen, making for an interesting comparison between Burns’s journal entry and our own experience.  Burns described Aberdeen as ‘a lazy town’, which cannot be said of it today. The arrival of the oil industry has allowed for a development of the place. It is now a vibrant town comprised on the one hand by affluent oil workers and on the other by students of the two universities.

Burns visited Aberdeen over Sunday 9th and Monday 10th of September 1787, where he spent time with the Edinburgh literati. People such as Professor of Hebrew at King’s College, John Ross and Professor of Universal History at Edinburgh University, Alexander Fraser Tytler, accompanied Burns in the city.  Burns still casts a shadow over the people of Aberdeen today,  due to a large statue of the bard that overlooks Union Terrace Gardens in the heart of the city.