On 26th August 1787, Burns wrote to Robert Muir from Stirling:  “just now from Stirling Castle I have seen the setting-sun the glorious prospect of the windings of Forth through the rich carse of Falkirk” and, although we arrived in Stirling early in the day, we can claim to have witnessed a similar scene today.

Stirling Castle continues to be a pilgrimage site for anyone interested in Scottish history, and the visitor numbers that we contended with were testament to that. The Castle casts its shadow over Stirling Bridge, and is overlooked by the Wallace Monument from the other side, which depicts a scene that, as Burns said about Bannockburn, “no Scot can pass uninterested”. 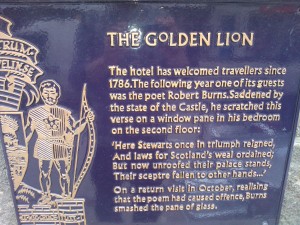 The above lines that Burns had etched into one of the windows of the Inn had “caused offence” due to its anti-hanoverian sentiments, and Burns subsequently smashed the pane on his next visit. It would appear, however, that Stirling hasn’t forgotten them; in the graveyard next to the Castle there is another plaque that repeats them, but it would seem that the offence once taken by the people of Stirling has waned as the presentation of the lines here are very much celebratory.

As Nigel Leask states in his upcoming edition, “[i]n a profound sense [Burns] was journeying back in time through Scotland’s history both ancient and modern, taking in ‘druid’s temples’ and Ossianic monuments”, and so we have attempted to do the same. Ossian’s Grave, a typically romanticised site, was not a disappointment. Although there is a now a paved road, it does little to detract from the landscape of the Sma’ Glen which suitably houses the monument to the ancient Gaelic bard. The stone, about 8ft high, was raised by General Wade’s troops when building a military road. Upon doing so they found a coffin and some bones underneath. The stone has since been associated with Ossian and has been a point of literary and historical interest.

Although Burns, so often thought of as a Romantic, was amidst Highland scenery and found himself at that very monument, he refrained from expressing much in the way of inspiration, admiration or even description. Perhaps he saved that for the poems and songs that followed his journey.

On the same day that Burns visited Ossian’s Grave (Wednesday 29th August) he also commented on the ‘remarkable characters at Taymouth – described in rhyme’. Here, Burns refers to Taymouth Castle, which still stands majestically overlooking the village of Kenmore. 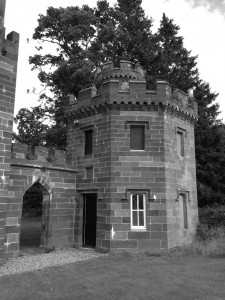 At the time of Burns’s visit, the castle was home to John Campbell, Earl of Breadalbane (1762-1834), president of the London Highland Society. As Leask points out, Campbell was also the ‘ironic dedicatee of Burns’s attack in ”Address of Beelzebub”’ . Thus, with the benefit of hindsight, it’s interesting to juxtapose Burns’s description of Breadalbane as a ”remarkable character” in his Highland Tour journal, with the scathing satirical depiction of him as outlined in the prefatory remark to ”Address of Beelzebub”:

To the Rt. Honble John, Earl of Breadalbane, President of the Rt Honble the Highland Society, which met, on the 23rd of May last, at the Shakespeare, Covent Garden, to concert ways and means frustrate the designs of FIVE HUNDRED HIGHLANDERS

While there is clearly a resentment towards aristocratic attempts to prevent emigration in ‘Address of Beelzebub’, it’s notable that Burns avoids any reference to this upon his visit to Breadalbane’s home and in his corresponding journal entry. Burns’s poem was written in 1786, one year prior to to the Highland Tour. Crucially, however, it was not actually published – due to its controversial nature – until 1818.

Today, the grandiose surrounds of the castle are still only a short walk from the Kenmore Hotel, where Burns wrote the lines ‘Admiring Nature in her wildest grace’ in pencil over the chimney piece, shortly after his visit to Breadalbane’s home. 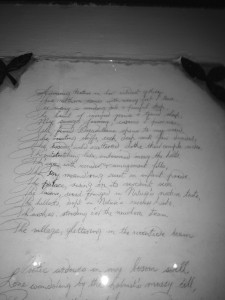 It is that very chimney piece that we are sat under today, where Burns’s scrawlings remain visible for us to read following our own visit to Taymouth.

While the benefit of historical hindsight and literary criticism may aid us in better understanding fragments of Burns’s tour journal entries and observations, there is also a sense that, we, like Burns, will continue to tour the Highlands in search of our own deepened understanding of Scottish culture and history. That Burns’s own tour journal has now become our history, is, perhaps, not without a hint of irony.