From the Whitebridge Hotel we continued northwards through Inverness and on to Culloden Battlefield. Burns visited the site on the 6th of September 1787, but only writes:

‘Come over Culloden Muir reflections on the field of battle’

As Nigel Leask states, ‘[g]iven his strongly expressed Jacobite sympathies, [Burns’s] laconic entry here is surprising’ and so what Burns’s reflections might have involved we will never fully know. Thomas Pennant, who’s earlier Highland tour journal Burns was probably familiar with, thought the day of the battle was ‘productive of so much benefit to the united kingdoms’. Burns, however, did write and work on a number of Jacobite themed songs in the years after his Highland tour and, as we mentioned in yesterday’s blog entry, the tour itself can even be thought of as a ‘Jacobite Journey’. It is therefore reasonably safe to speculate as to which side of Culloden Battlefield Burns’s reflections were in sympathy with. 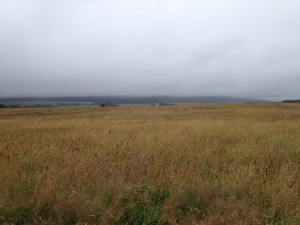 With Burns’s reflections strangely absent, our own might suffice for now. When Burns visited Culloden he would have just seen the sparse marshland stretching out in front of him where the two armies faced each other, whereas now there is a modern visitor centre and countless relics and stories from the era of the Jacobite uprisings – even those dressed as Jacobites and Redcoats and a 4-sided cinema that puts you right in the middle of a re-enactment of the battle.

The visitor centre deserves a lot of credit; it is an excellent experience, and does not detract from the feeling that you get when you know you’re on a site of real significance. We took our time at this stop on our trip. We walked around the field and we paid our respects at the mass graves of the Highlanders who died in the brutal battle.

After Culloden, we visited the nearby Kilravock Castle and Castle Cawdor, both of which are steeped in a deep sense of history that extends further back than the events at Culloden. Leask’s assertion that Burns was, in many ways, ‘journeying back in time through Scotland’s history, both ancient and modern’ became even more apparent upon approaching Kilravock Castle. 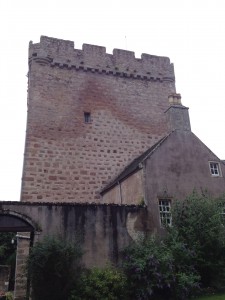 As we found out, the castle binds together ancient and modern history, and ironically – for us Burns scholars – now has an added layer of interest as being part of the Bard’s Highland Tour. The Roses of Kilravock were established in the Castle as early as 1293, thus making them ‘the longest unbroken family succession in Scottish History’ (Leask). What was of more interest to us – and most probably Burns after his visit to Culloden – was that Prince Charles Edward Stewart stayed at th Castle prior to his defeat at Culloden. The eventual victor at Culloden , the Duke of Cumberland, is also said to have stayed at the castle.

Castle Cawdor is today surrounded in lush green gardens, filled with tourists eager to see inside the medieval castle that was built in 1454. With a row of tourists shops and cafes, the castle grounds will have undoubtedly undergone some visible changes since Burns’s visit in 1787. However, the ‘rocky banks’ he refers to in his tour journal entry are still visible from the castle car park:

While Burns’s allusion to Macbeth certainly stirred our own imaginations upon visiting the castle, Leask makes the extremely important point that:

‘Given that the castle was built in 1454, it postdates the legendary events of Shakespeare’s Macbeth, so it is highly unlikely that RB did in fact see the bed on which Duncan was stabbed!

Once again, the invaluable information and research in the upcoming edition was there to aid us in picking apart Burns’s journal entry, and also in order to understand the places he visited with better clarity today.