Day 2 – Today took us from the Kenmore Hotel to Killiecrankie, Blair Castle, the Falls of Foyers and the Whitebridge Hotel, with our itinerary formed around Burns’s entry from the 31st August 1787:

The Pass of Killiecrankie is spectacular. The valley rises up from the river bed in stages, each of which have been taken advantage of as methods of transport improved. High up is the A9 road that took us there, lower there is a Victorian railway viaduct (still in use) with huge, impressive arches, and down near the valley floor there is an earlier stone road, reminiscent of the roads that General Wade built to improve mobility in the Highlands and also help quash Jacobite threats. 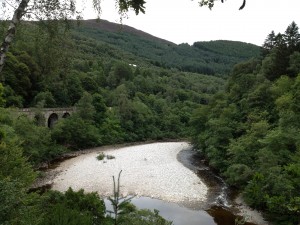 Of course, the Jacobites are the reason why Killiecrankie is important; it is the sight of a victory they gained, led by Viscount Dundee (or, as Burns calls him, ‘Lord Dundee’), over the Government troops, and the old road leads down to the bottom of the valley, near to where the short but bloody battle happened.

Nigel Leask states that “[i]t would not be an exaggeration to describe [Burns’s] Highland Tour as a ‘Jacobite Journey’ given the frequency with which [he] alludes to the agents and events of the 1715 and 1745 uprisings” and it is easy to imagine that Killiecrankie would have been an inspiring place for Burns.

The visitor centre tells the story of the ‘Soldier’s Leap’, where a Government soldier, being chased by some Highland swordsmen, supposedly cleared an 18ft gap in the rocks on either side of the river Garry to escape. When you can visibly witness the places where these events happened it becomes clear why it featured on Burns’s Highland tour.

As we moved onto Blair Castle, it was swarmed with tourists eager to journey through the history of the various Dukes and Earls of Atholl that once inhabited it. 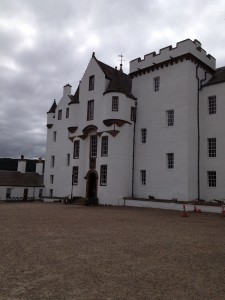 At the time of Burns’s visit , Blair Castle was the seat of John Murray, 4th Duke of Atholl (1775-1830). Carrying a letter of introduction to the Duke from Hugh Blair, Burns spent Saturday 31st August – 1st September as a guest of the Duke and Duchess (although his fellow traveller William Nicol did not attend). As Leask points out, Burns ‘would have stayed longer if it were not for the jealousy of Nicol, who (along with the chaise driver Mr Carnegie) was left to his own devices at the Inn.’

Having visited Blair Castle on the same day as Killiecrankie (as Burns also did), one of the notable features at the entrance was the armour of Viscount Dundee. Among the other items that help develop a picture of Scotland’s past, Blair Castle contains a portrait of Neil Gow, along with his famous fiddle which sits just below it. Regarded as the father of of the Strathspey and Reel music, Gow played for successive Dukes of Atholl and was to become one of the most important Scottish musicians of the eighteenth-century. 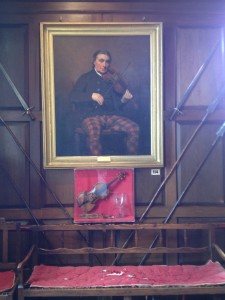 It was on his Highland Tour that Burns encountered Neil Gow, when the fiddle player performed for Dr Alexander Stewart in Dunkeld. It’s worth remembering that, at the time of the Highland Tour, Burns was already collecting songs for James Johnson’s Scots Musical Museum, and it seems there is little doubt that Burns’s encounters with Scottish musicians contributed to his development as a song collector and writer. As Leask remarks:

Many of the lyrics and melodies subsequently published by Johnson and Thomson, from both Gaelic and Lowland tradition, were either collected on the Highland Tour, or evoked people and places that RB had personally encountered en route. In this respect the HT is an Important point of reference for the subsequent song volumes in OCRB.

We decided to make some headway northwards and so carried on to Loch Ness and the Falls of Foyers. Burns visited the falls on Wednesday 5th September 1787 where he composed ‘Written with a Pencil, standing by the Fall of Fyers, near Loch Ness’ which has now become a feature of the place itself. The lines from the poem appear on slate signs as you descend from the road to the huge waterfall:

Among the heathy hills

As high in air

The Falls these days, due to damming farther up the river, have suffered a diminishing of the water levels passing over the edge, so the sight that Burns would have seen would have been even more dramatic than the one left us more than a little impressed. 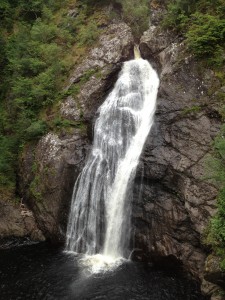 We are now writing from the Whitebridge Hotel, which itself has links to Scotland’s Jacobite uprisings. The town is named after a bridge that General Wade built and the Hotel stands on a site that once had a military resting point for Wade’s troops. The resting point burned down and the hotel that we are staying in was constructed on the same site in 1899. It seems, much like for Burns, history continues to inform, shape and inspire our own continuing journey.