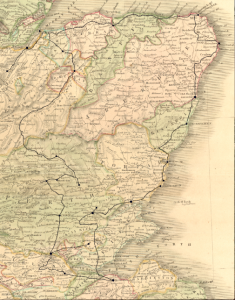 On 25th August 1787 Robert Burns and William Nicol, a Latin master at Edinburgh High School, embarked on a 22-day Highland Tour that covered nearly 600 miles through the central Highlands and as far North as Inverness.

Like the West Highland tour that Burns undertook the previous June, the Highland tour followed an established itinerary, with sections of the journey following in the footsteps of celebrated travellers like Welsh naturalist and antiquarian Thomas Pennant (with whose 1769 and 1772 Tours of Scotland both Burns and Nicol seem to have been acquainted with).

Burns’s Highland Tour journal not only conveys a few reflections on Scottish culture by Burns at a time of intense historical change, but also reveals aspects of the poet’s creative development, particularly in regards to his interest in song collecting (Burns was to come into contact with some of the leading collectors, performers and musicians of eighteenth-century Scotland including Neil Gow and James Marshall among many others). On a more personal level, Burns also visited family in Montrose and Stonehaven, gathering details of his family history that may have inspired the various Jacobite allusions that appear throughout the journal. Some of the people Burns met on the tour also played a part in shaping his future.

In anticipation of the first OUP edition, Robert Burns: Commonplace Books, Tour Journals, and Miscellaneous Prose, edited by Nigel Leask, we have endeavoured to visit some of the most significant places that Burns writes about in his tour journal.  We will reflect on Burns’s journal entries from their corresponding locations via this blog, adding our own commentary, as well as providing excerpts from Nigel Leask’s edited edition, which will be published in full by Oxford University Press in 2014.  It’s worth noting that much of the information, insight and notes we will allude to are but small snippets of Nigel Leask’s extensive research, and it is our intention that by physically visiting the same places Burns did in his Highland Tour of 1787, we will bring attention to the importance of the edition, which draws together Burns’s Commonplace Books, Tour Journals and Prose in one edited volume for the first time.

Our shortened version of Burns’s Highland Tour will take place between Monday 5th August-Friday 9th August, and we will be live-blogging from different locations daily.

We hope you enjoy the journey with us.