Robert Burns died on the 21st July 1796 at the age of just thirty-seven. Our most recent online exhibition, launched to mark this anniversary in July 2013, invites you to share some of Burns’s own thoughts on death from his poetry and correspondence, as well as some interesting facts and images regarding Burns’s illness, the events leading up to his death, the fascinating and unusual treatment of the bard’s remains by the Victorians, and his memorialisation more generally.

It is apparent from Burns’s correspondence, his poetry, and even from his First Commonplace Book that the bard was plagued by ill health on several occasions throughout his short life. ‘A Prayer in the Prospect of Death’, first published in the ‘Kilmarnock’ edition of Burns’s Poems, Chiefly in the Scottish Dialect (1786) is believed to have been written in 1784 when the bard was just twenty-five years of age and suffering a bout of ill health:

O Thou unknown, Almighty Cause
Of all my hope and fear!
In whose dread presence, ere an hour,
Perhaps I must appear!
— From, ‘A Prayer in the Prospect of Death’

Play a podcast about Burns’s death, written by Jonathan Henderson: 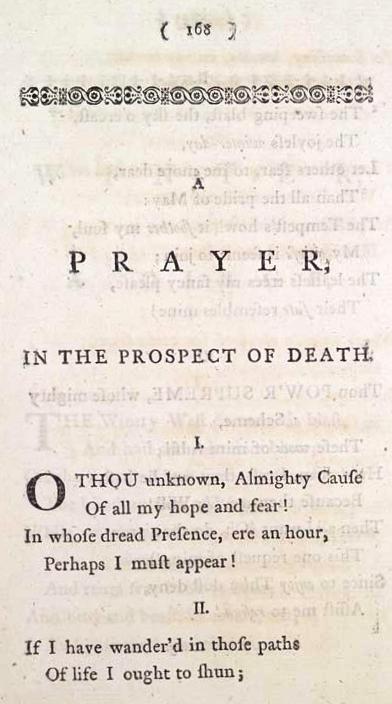 In his First Commonplace Book, Burns gives this poem the longer, more explanatory title, ‘A Prayer, when fainting fits, & other alarming symptoms of a Pleurisy or some other dangerous disorder, which indeed still threaten me, first put Nature on the alarm.’
Indeed, we might consider that the threat of illness never truly left the bard: there are several references throughout the poets’ correspondence to rheumatic episodes, hypochondria, physical injury, toothache and periods of ‘melancholy’. However, the first signs of the illness which would eventually claim Burns’s life began in the winter of 1795 when the poet was confined to his sick-bed for several weeks. His health declined over the course of the months that followed, and from the bard’s correspondence in the summer months of 1796 it would appear that he sensed the finality of this particular episode of ill health. In a letter to George Thomson (1757-1851) on the 4th of July the bard wrote: ‘I received your songs, but my health being so precarious nay dangerously situated, that as a last effort I am here at sea-bathing quarters. – Besides my inveterate rheumatism, my appetite is quite gone; & I am so emaciated as to be scarce able to support myself on my own legs.’ Burns was soon aware that the sea-bathing was ineffective, writing to his father-in-law James Armour on the 10th of July that, ‘I have now been a week at salt water, & though I think I have got some good by it, yet I have some secret fears that this business will be dangerous if not fatal.’ Tragically, Burns’s final letters became increasingly desperate, and the poet expressed deep concern for the welfare of his family. To his brother Gilbert Burns (1760-1827) he wrote: ‘God help my wife & children, if I am taken from their head! – They will be poor indeed. – I have contracted one or two serious debts, partly from my illness these many months, & partly from too much thoughtlessness as to expense when I came to town that will cut in too much on the little I leave them in your hands.’ Recent groundbreaking research by Clark McGinn has demonstrated that Burns was right to be concerned. Indeed, Burns died in significant financial difficulty, overshadowed with the threat of debtors’ jail. Burns himself acknowledges this in a letter to his cousin, James Burness, on the 12th of July in which he states: ‘When you offered me money assistance, little did I think I should want it so soon. A rascal of a haberdasher, to whom I owe a considerable bill, taking it into his head that I am dying, has commenced a process against me, and will infallibly put my emaciated body into jail.’ Before this threat could be realised, Burns died surrounded by his family and close friends on the 21st of July 1796.

While biographers and critics have offered several theories surrounding the cause of Burns’s death (many of which are fanciful and without evidence, some even hinting at conspiracy), scholars and medics who have examined the poet’s own account of his illness, together with those of his contemporaries, agree that the poet most likely died from bacterial endocarditis: a serious complication of the poet’s recurring rheumatic illness. 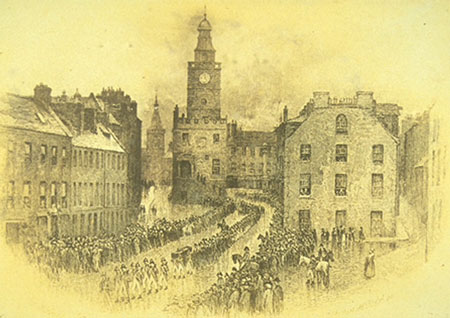 Burns’s funeral took place at midday on the 25th of July 1796 at St Michaels Kirkyard, Dumfries. As a member of the Royal Dumfries Volunteers, Burns’s was a Military funeral. The regiment attended in full uniform, and several gun shots were fired over the bard’s grave, as was the tradition. Attendance at Burns’s funeral was unprecedented, with thousands of mourners lining the streets of Dumfries leading to the kirkyard. Tragically, the poet’s wife, Jean Armour Burns (1767-1834), was unable to attend the funeral. On the same day she gave birth to Burns’s youngest child, Maxwell Burns (1796-1799). Burns’s funeral is depicted in this engraving by William Forest after the engraving by William E. Lockhart RSA (1879). It was presented to the Burns Monument Trust (now the Robert Burns Birthplace Museum) in 1895.

Play a podcast about Burns’s funeral, written by Gerry Carruthers: 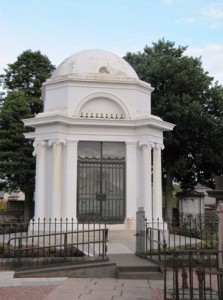 Robert Burns’s grave in St Michaels kirkyard was extremely modest, marked only by a solitary and plain gravestone. Many of Burns’s admirers felt that the original grave was an insufficient tribute to Burns’s genius. And so, in 1813, the poet’s close friend John Syme organised a committee to plan a more suitable resting place for the Scottish National Bard. Subscriptions for the Mausoleum were gathered from admirers worldwide, among these Sir Walter Scott and the Prince Regent (George IV). The mausoleum, designed by Thomas Frederick Hunt, (c. 1790 – 1831), is an impressive dome-shaped building over twenty-five feet in height, and the inside boasts an elaborate design of Burns with his muse Coila – a scene from tha bard’s poem ‘The Vision’ – sculpted by the artist Peter Turnerelli (1774-1839). On the 19th of September 1815, Robert Burns’s body was exhumed from his original, modest grave, and reinterred in the Mausoleum which stands in the south-eastern corner of St Michaels kirkyard.

For further information regarding the Dumfries Burns Mausoleum, as well as other Burns memorials and statues worldwide, please visit the Robert Burns Beyond Text website.