This Halloween, we thought we’d share what interests us about Burns’s most famous and most eerie tale: ‘Tam o’ Shanter’. 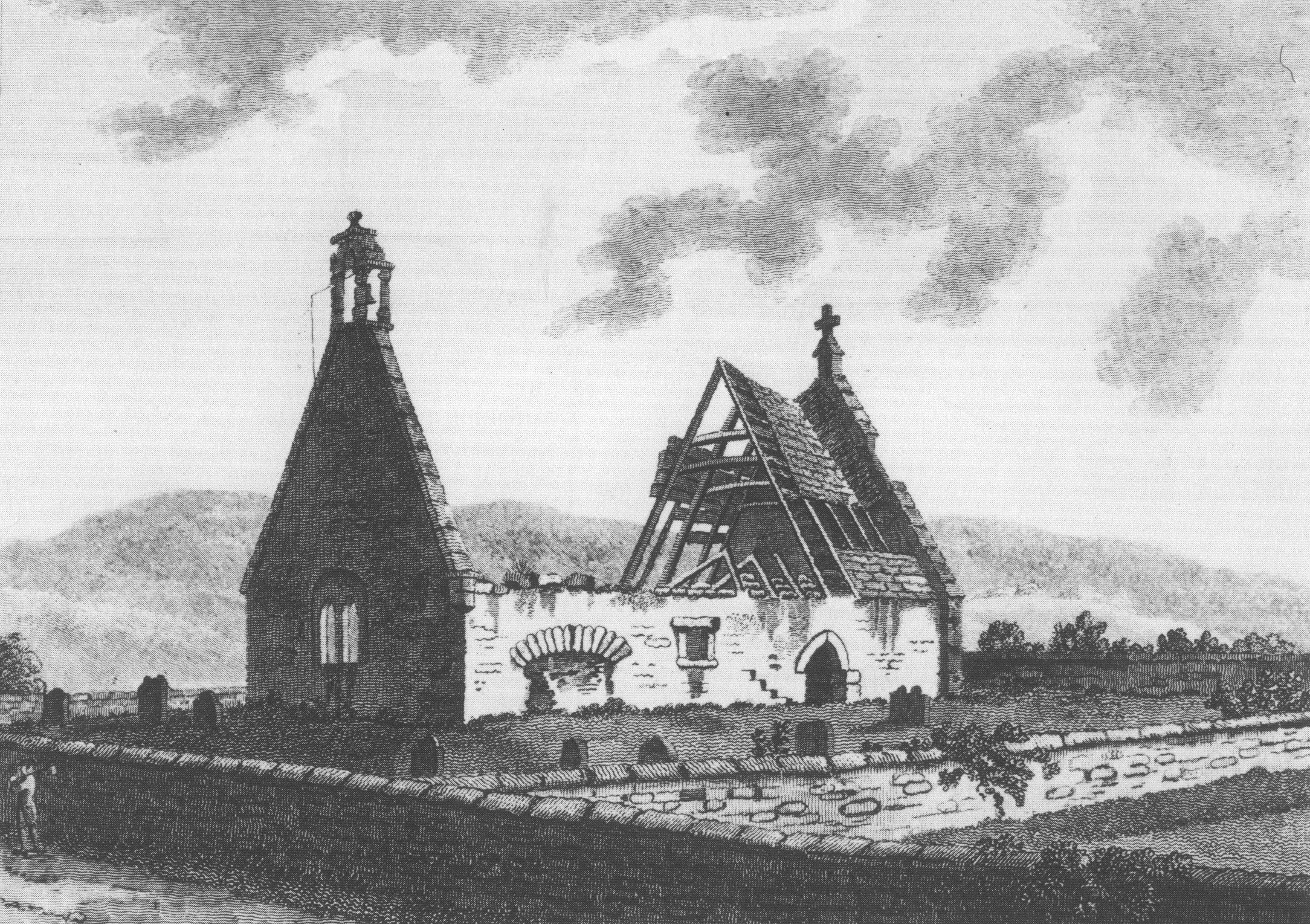 ‘Tam o’ Shanter’ was written at the suggestion of the antiquarian Francis Grose (1731-91), then collecting material for his Antiquities of Scotland. Grose tasked Burns with producing something to accompany an illustration of Alloway Kirk. The poem developed from three prose fragments, submitted to Grose in June 1790, which Burns claimed to have heard among the stock of local ‘Witch Stories’. He sent his verse tale in December of the same year, and it was first published as a bulky footnote in Grose’s book. This original appearance helps to explain the tone of the work, which explores the complexities of folklore and its connection to place. Indeed, Grose’s introduction locates the poem within a ‘famous’ history of ‘infernal meetings’ featuring ‘the muckle-horned Deel’, delighting in a blurry interplay between folk tradition and the historical record.

‘Tam o’ Shanter’ functions as more than a tantalising supernatural thriller. Burns’s tale provides a humorous, yet complex reflection upon human nature as well as a colourful and energetic survey of antiquarianism, folklore and the supernatural.

Burns’s tale of a drunken farmer, who encounters a demonic ceilidh on his way home from the market day, serves an almost mythological role in Scottish culture, and ‘Tam’ addresses itself to national issues in a number of ways. The central scene at Kirk-Alloway is full of Scottish imagery, with the devil found playing the bagpipes. Likewise, critics have long seen the wayward Tam as a national figure, which raises interesting questions around gender politics, community, imagination and the place of alcohol in Scottish culture. Burns’s reflections on national identity are complex and remain disputed, yet in ‘Tam o’ Shanter’ it is clear that his focus expands beyond Alloway and Ayrshire, using supernatural thrills to essay the Scottish nation. 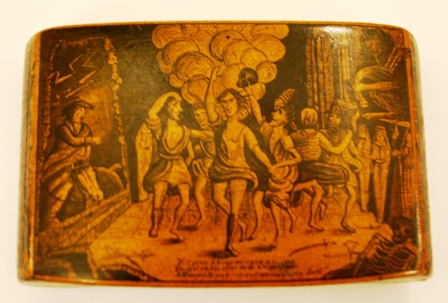 While simplistic readings of the ‘Tam o’ Shanter’ advocate the poem’s inscription of stereotypical gender roles, modern criticism has increasingly identified and addressed several layers of complexity pertaining to Burns’s treatment of men and women (see, References and Further Reading). Briefly summarised: It is the case that the opening lines of ‘Tam o’ Shanter’ introduce a sociable, fraternal male ‘bousing at the nappy’ (l. 5) and cavorting with the landlady; his wife waiting at home, ‘sulky’ and ‘sullen’ with her increasing displeasure inscribed upon her ‘gathering brows’. However, Burns’s depiction of such clichéd characters might be considered a prelude to the poet’s more nuanced treatment of gender and sexuality as the work progresses. We might consider, for example, that Burns complicates received notions of gender when the drunken, leering Tam is pursued and nearly caught by the ‘young’, ‘strang’ witch Nannie: a punishment for failing to suppress his forthright masculinity, and for crying out that most famous of exclamations, ‘Weel done cutty sark!’. Equally complex is the conclusion of the poem where Tam narrowly escapes Nannie’s sinister clutch only for his female horse to lose her tale, thus bearing the punishment meant for Tam. And so, Burns skilfully and subtly gestures towards the complexity of received gender roles and male-female relationships.

Antiquarianism is the study of things of the past. Antiquarians collected historical accounts; descriptions of historical sites and places of folkloric significance; tales; legends and objects. Burns was very aware of his friend Frances Grose’s activities as an Antiquarian, and wrote a poem, ‘On the Late Captain Grose’s Peregrinations thro’ Scotland, collecting the Antiquities of that Kingdom’, in his honour:

Burns also appeals to Grose’s antiquarian interests in ‘Tam o’ Shanter’, by drawing upon the notion of local folklore to infuse Tam’s journey with supernatural threat:

By this time he was cross the ford,
Where in the snaw the chapman smoor’d;
And past the birks and meikle stane,
Where drunken Charlie brak’s neck-bane;
And thro’ the whins, and by the cairn,
Where hunters fand the murder’d bairn;
And near the thorn, aboon the well,
Where Mungo’s mither hang’d hersel’.                (ll.89-96)

Furthermore, when Tam reaches Alloway Auld Kirk he observes a series of grotesque and curious objects placed on an alter, or rather a ‘haly table’:

This list of bodily grotesquery and mutilation functions on several levels: as yet another reference to Grose’s activities as an antiquarian and collector of objects with historical and folkloric significance; as a means of conveying danger and horror; and to emphasise the dangers and consequences of drink and illicit sex – one of the main preoccupations of Burns’s poem.

Tam o’ Shanter’s eventful ride home continues to stimulate the public imagination in Scotland and beyond. For generations, Scottish schoolchildren have thrust new life into the poem through ceremonial recitals and dramatic re-enactments, while in 2012, a YouGov survey (conducted as part of the Year of Creative Scotland) declared Tam O’ Shanter as ‘the nation’s favourite’ Burns poem. In a poll comprised of over 1000 participants, almost a quarter (23%) chose the supernatural tale over both A Man’s A Man for A’ That (17%) and Address To a Haggis (16%); a testament to both the poem’s impactful legacy and continuing popular appeal in Scotland.

While the poem was clearly inspired by Burns’s Ayrshire locale, Tam’s supernatural night of ‘bousing at the nappy’ has also proved universally popular, evidenced by the streams of international tourists who continue to visit the Auld Alloway Kirk and relive the thrilling narrative chase towards the Brig O’ Doon. The poem has also taken on new resonances in global locations, particularly in areas where the Scottish diaspora have settled and continue to celebrate Burns through recitals, suppers and various other commemorative acts.

Indeed, Tam o’ Shanter remains a staple favourite at ‘Burns Suppers’ in all corners of the world, as documented by University of Glasgow researcher Clark McGinn, who has extensively discussed ‘Global’ commemorations of the poet in his doctoral thesis. More abstractly, The Tam o’ Shanter Inn, in Los Angeles, California, claims to be the city’s oldest surviving restaurant (established in the 1920s) and counts Walt Disney among prominent former patrons, while Tam o’ Shanter Point, at the tip of North-Eastern Australia, remains a popular destination for surfers and tourists; proving just how widely and diversely the poem continues to live on in public memory around the world.

‘Tam o’ Shanter’, with its folkloric roots, its eerie appeal, and complex subject matter, has inspired painters, engravers, sculptors, and composers worldwide – from the poem’s first appearance, and through to present day. 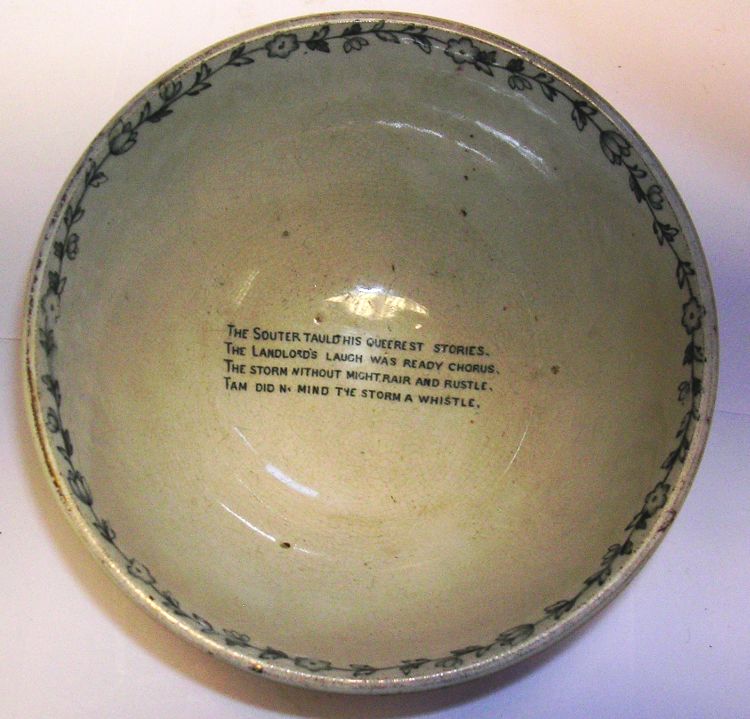 Various scenes of Robert Burns’s famous poem have been represented in the visual arts – whether it’s Tam drinking with Souter Johnie, or as he stops to take a glimpse of the ‘unco sight’ at Alloway Kirk; whether it’s the ‘Warlocks and witches in a dance’ to the sound of Auld Nick’s bagpipes as Tam peeps through the window ‘like ane bewithc’d’, or his wild horse-ride over the bridge as Nannie pulls off poor Maggie’s tail.

Due to the conviviality of the scene, Tam and Souter Johnie enjoying their ale are often seen depicted on earthenware, jugs, and dishes. The ceramic bowl from the Hunterian Art Gallery and Museum at the University of Glasgow (item GLAHM 138245) is a good example: the two characters are portrayed together on either side, separated by a decorative, colourful floral motif. Inside the bowl is an inscription with a quote taken from the poem:

The Souter tauld his queerest stories,
The Landlord’s laugh was ready chorus,
The storm without might rair and rustle,
Tam did no mind the storm a whistle. 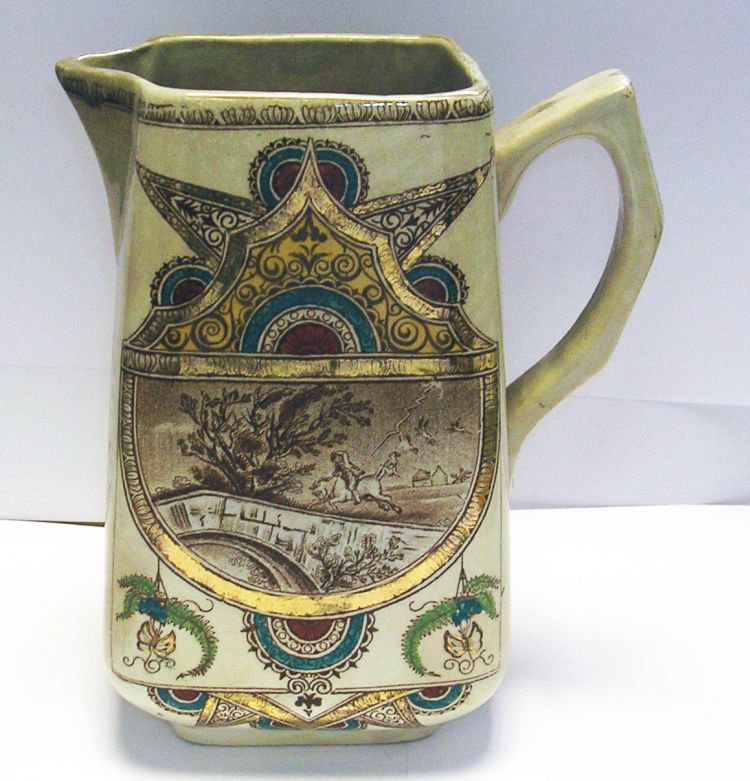 A similar interior scene, but with the addition of the landlord, and the landlady with whom Tam ‘grew gracious’, can be found on item GLAHM 138251: a colourful jug, with gilded bands framing a different scene on each side of it. On the opposite side of the interior scene is the brig o’ Doon, with Tam and the horse Maggie galloping across it under a thunderstorm, chased by winged ghosts and spirits, as Nannie the witch tugs at the poor horse’s tail.

Besides jugs and dishes, Tam o’ Shanter drinking with his merry company is also represented in statuary such as the early-nineteenth-century memorial ensemble by James Thom. The statues, impressively, are approximately life-sized and show the characters sitting in a semi-circle, as they enjoy their drink. The focus is on the conviviality of the scene, rather than on any moralising intent.

Some pictorial depictions, such as Pryse Lockhart Gordon’s late-eighteenth/early-nineteenth century ink and watercolour drawing (BM 1962,0206.1), seem to convey the artist’s judgment on the moral lowliness of Tam, and of the overall episode, through the most immediate level of the characters’ ugliness. The scene shows Tam riding his startled, bony horse as they flee from a horrific-looking Nannie. She is skeletal, with very little hair on her head and barely covered by a long tartan scarf. A cartoon-like crow hovers above them – the bird too seems bony, and imperfect like the other characters. Gordon’s drawing almost appears to be in line with the kind of anti-Scottish satire which circulated widely in the eighteenth century, mostly in negative response to the Jacobite uprisings. 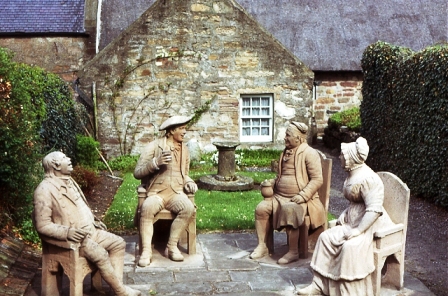 Statues by James Thom at Kirkoswald. © Robert Burns Beyond Text, 2011

Gordon’s example is certainly not the most popular view though. Many artists seem to have been inspired by the ‘Gothic’ value of the spirits and witches’s dance: John Masey Wright in 1839 produced an illustration (BM 1871,0812.2759) for Cunningham’s edition of Burns’s poems, and in this depiction the focus is not on Tam, who appears in a corner as he peeps through a window. Instead, the fulcrum is Nannie, who is far from bony and ugly, and is dancing in the middle of a frightful circle of old frisking witches. While Nannie is illuminated by a ‘magical’ source-less light, in the darkest corner of the picture is ‘auld Nick, in shape o’ beast; / A towzie tyke, black, grim, and large’, playing a single-droned bagpipe. Much a similar view can be found in a number of other illustrations to the poem, such as the one in the 1816 publication The Poetical Works of Robert Burns, to which is prefixed a Sketch of his Life: Nannie is again the focus of the viewer’s gaze, and the devil-piper is sitting right above her as witches and skeletons are seen on either side – while Tam and Maggie watch in amazement through what appears to be a gap in a cloud of smoke. There are many other artists who have enjoyed giving their interpretation of the scene of Tam’s sighting of the witches’ dance.

Musically speaking, the story of Tam o’ Shanter has been set by various composers – from folky-sounding singer-songwriters to composers of art music. Each give their own musical interpretation of the events. To render the idea of the music played by Auld Nick, Sir Alexander Campbell Mackenzie in his 1911 ‘Scottish Rhapsodie no.3’ quite strikingly wrote the score in such a way as to make the orchestra to sound like bagpipe, while Sir Malcolm Arnold goes as far as including a bagpipe chanter in the orchestra in his ‘Tam o’ Shanter Overture’, Op. 51, (1955). Tommy Fowler, in his ‘Tam’s Moral’, with his discordant unaccompanied choral composition focuses gives the listener a musical narration of the ‘moral’ of the story, with a final ‘Rrrrremember Tam o’ Shanter!’. The sounds (including hiccups to describe Tam’s drunkenness!) acquiring more importance than the actual words (you can read more about this piece at Robert Burns Choral Settings). These are of course but a few examples and, to this day, Burns’s poem continues to inspire far beyond the realms of literature.