As per usual it’s been a busy time on the project in the past few weeks. After my trip to New York in June I’ve been working closely with Vivien and Gerry McKeever on the Burns songs for Thomson, finalising our final list of songs, and checking the texts that Thomson published closely with the texts Burns sent him with his letters.

But we’ve also been working hard towards our project relating to the performances of Burns’s songs in his own day! So, working with colleagues at the University here, The Royal Conservatoire of Scotland, and at the National Youth Choir of Scotland, we’ve brought together a group of singers and instrumentalists interested in exploring those first performances of Burns’s songs. Across a series of workshops in September and October we are going to have a go at performing the songs as they first appeared in the Scots Musical Museum and in Thomson’s collections, using original copies from the first editions. We’re going to recreate, in the 21st century, performances of the songs on period instruments and explore what these songs might have sounded like when they were performed at home in the 1780s and 1790s and right the way through the early decades of the 19th century.

Last Friday we had the first of our workshops where we shared information about the new edition of the Museum, edited by Murray Pittock, and the work we’re currently doing on Thomson’s collections. We had a wonderful presentation about singing lessons in the 18th century, by a PhD student here at Glasgow, Brianna Robertson-Kirkland, who told us what ladies and gentlemen would have been taught in lessons and how that might effect the ways in which we sing the songs as part of our project. Dr Sally Tuckett, Lecturer in History of Dress and Textiles (History of Art) here at the University gave a wonderfully informative presentation about costume. She explored how ‘stays’ might have helped with posture and breathing and how frilly shirt cuffs might have got in the way of playing at the harpsichord! And Dr Karen McAulay from the Royal Conservatoire of Scotland talked about the AHRC funded Bass Cultures project based here at The University, which is exploring the development of bass accompaniments for published fiddle collections in Scotland during the 18th century.

We made the first of a series of interviews with our young performers which will become part of a web resource on this site, tracking the project. It will include recordings of a number of songs which we are making, in collaboration with the National Trust for Scotland, at Glasgow’s Pollock House, later in October. So keep in touch with our blogs, tweets and we’ll let you know as and when material comes up on our website! 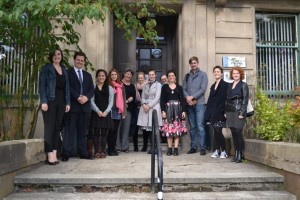