As we approach Hogmanay 2014/15, the ‘Editing Robert Burns for the 21st Century’ team have been thinking about the different ways in which ‘Auld Lang Syne’, Burns’s most universally famous song, has been remembered and performed from the eighteenth-century to the present day. In our ‘Auld Lang Syne’ online exhibition we have provided a history of the song, accompanied by audio clips of the alternative musical settings published in James Johnson’s Scots Musical Museum (1796) and George Thomson’s Select Collection of Original Scottish Airs (1799). Here Vivien Williams looks at an interesting piece of ‘Auld Lang Syne’ memorabilia. 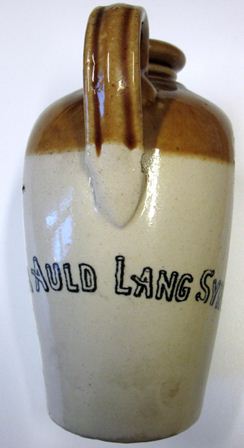 As stated by Kirsteen McCue and Marjorie Rycroft, “‘Auld lang syne’ is, next to ‘Happy Birthday’, the best known and most often-sung song across the globe” (The Reception of Robert Burns in Europe, ed. by Murray Pittock, 2014, p. 267). There is little doubt that the song has acquired iconic significance, and that those three words are enough to trigger a world of feelings.

‘Auld Lang Syne’ has been celebrated across the centuries, not least through its appearance on commemorative objects of all kinds. A particularly nice example is this pair of undated matching ceramic bottles by an unknown Scottish manufacturer, currently held at the Hunterian Art Gallery and Museum at the University of Glasgow (items GLAHM 138386 and 138387). They are exactly the same in pattern and design, but were produced in two different sizes, measuring respectively 7cm x 12 cm, 14cm high and 6cm x 11cm, 12cm high.

These two ceramic bottles have a rather rustic appearance; the tones of brown and stone are adorned with black and white designs. A thistle theme with a painted ribbon garlands a rural scene. In the background are mountains, clouds and birds; in the forefront there are two characters on a grassy plain: one is a piper, and one is a dancer. Both male figures are dressed in Scottish attire, with kilt, bonnet and tartan. 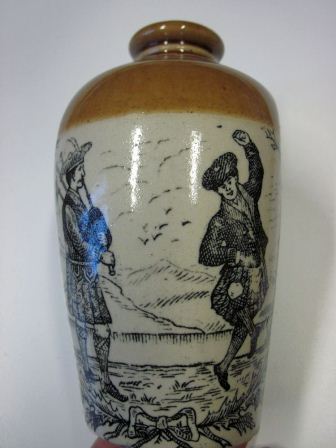 At the back of the scene, just under the handle of the bottle, are the words “For Auld Lang Syne”. How do we connect the words with the scene, if there is no mention of piping in Burns’s song, and if the “fitt” were not made “weary” by dancing but by running “about the braes”? One explanation could be that the scene might remind the viewer of traditions and pastimes of “lang syne”; customs which should never be forgotten, and “never brought to mind”. Another is that the phrase may have triggered feelings of Scottishness, particularly when set alongside images of the thistle (the Scottish national flower), the kilt (Scottish national dress), and bagpipes (the Scottish national instrument).

For me, the explanation lies in the function of the object itself. The bottle would possibly have been used to contain wine – so let’s dance, and be merry! Let’s “tak a cup o’kindness yet, / For auld lang syne”!

If you’d like to know more about Robert Burns-related memorabilia, then visit the Robert Burns Beyond Text project pages for further information and many more examples.