After a long hiatus from blogging about Burns-related items in the Hunterian Museum at the University of Glasgow, here I am again! This time, with a lovely little undated nineteenth-century jug dedicated to Tam o’Shanter.

It is white ceramic with burgundy decorations. It measures around 18 by 15 centimetres, and the handle resembles an acanthus leaf. The jug is decorated on two sides with scenes from the poem, and in the front with a depiction of Robert Burns himself. Luckily whoever decorated the jug added the caption “Burns” above it, because this little portrait bears hardly any resemblance with the face we are so accustomed to see! 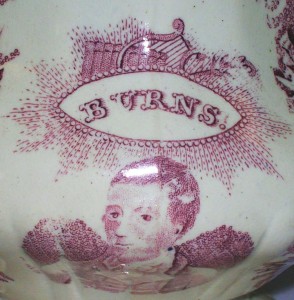 Decorating the caption are a lyre and a pan flute: the former symbolises poetry and (as the etymology of the word suggests) lyricism, while the latter stands for the pastoral world, and also the sensorial sphere. There is a long lineage in art history of a ‘hierarchy’ between stringed instruments and wind instruments: this is perhaps more eloquently exemplified in Titian’s ‘Concerto Campestre’, in which a well-dressed gentleman plays a lute as he converses with another man. They represent intellect, and play a plucked instrument; while a naked woman holds a recorder, with nothing but a crumpled sheet to barely cover one leg. Her sensual curves, the untidiness of the sheet, and lack of engagement in the men’s conversation further configure her as an icon of sensuality, and the more bodily sphere. 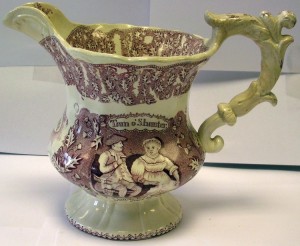 On the left side of our little jug is Tam with a glass in his hand, sitting next to a lady. The caption below tells us this scene is referring to the line “The landlady and Tam grew gracious” – and we know this meant “wi’ favours secret, sweet and precious”. No wonder the lady is smiling! 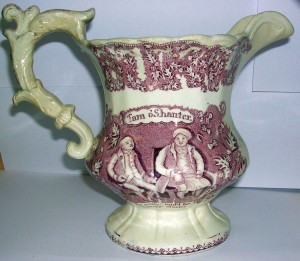 The thistle theme is picked up on the right side of the jug, which is decorated with another scene from the poem: it refers to the following line: “The Souter tauld his queerest stories”. So the two men portrayed are “Souter Johnny” – Tam’s “ancient, trusty, drouthy crony” – and the landlord.

The images depicted on this lovely (and amusing) item are clearly drink-related. Very appropriate, in fact, for a jug – I think I know what kind of beverage went into it…and I don’t think it was water!