The illustrations to George Thomson’s collections

The background to Thomson’s publications 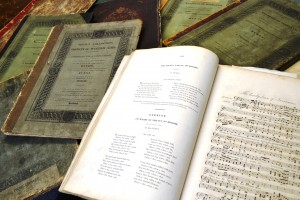 Thomson stated that the inspiration for his collections of songs came directly from the concerts of the Edinburgh Music Society, but his decision to produce his publications must also have been influenced by the commercial climate of Edinburgh. By the 1770s Edinburgh had become the Scottish publishing centre. There was something of a boom in Scottish publishing: many firms rivalled the large London businesses.

By the 1770s and ’80s in Scotland some publishing houses were connected with publications of Scottish songs and tunes. Although some orchestral and chamber music was published, most of the musical publications produced in eighteenth-century Scotland were connected with traditional Scottish music. There was a general interest in volumes of national songs and tunes elsewhere in Britain, but the number of publications of this sort in Scotland far outnumbered those produced in England, Ireland or Wales at this time. 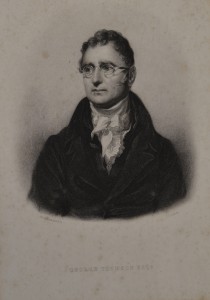 Thomson knew his rival collections very well indeed. And he had studied them closely before. He stated clearly in the Preface to the volume that he was critical of the majority of publications in the same mould as his own, referring to them as

all more or less exceptionable – a sad mixture of the good and evil, the pure and the impure (J. Wilson, The Land of Burns, p. 39).

The format of many collections did not impress him. He explained at length in the same preface that he regarded himself as something of a rescuer of Scottish song:

Many collections have been presented to the public, with different pretentions to favour, but all of them liable to particular objections. In the smaller selections, many charming Airs are omitted: while, on the other hand, in the large collections, there is always a great proportion of trifling and inferior airs, which serve only to swell the volume, and add to its expense […] And every collection that has yet been published, is exceptionable with respect to the poetry.

Thomson was obsessed from the beginning with high standards of presentation: the aesthetics of his product relied equally upon its artistic content and its visual beauty. From the outset he wanted to produce top-quality, sophisticated and elegant volumes, and to this end he contacted some of the top artists of his time – from David Allan to Thomas Stothard, and many more. With the exception of large firms such as those run by the Gow or Corri families, who could afford to employ engravers and printers on their premises, smaller businesses were able to produce musical publications by subcontracting to free-lance engravers, printers and papermakers. As Senior Clerk to the Board of Trustees, Thomson was never in the position of being able to devote himself solely to the production of his collections, although he found enough time to supervise the artistic content of his volumes. Thanks to the expansion of the Scottish trade, he was able to find willing engravers, printers and papermakers who would produce the goods quickly and cheaply. He was also able to choose from a wide range of individuals and companies who were able to create high-quality products which were amongst the best in Britain. 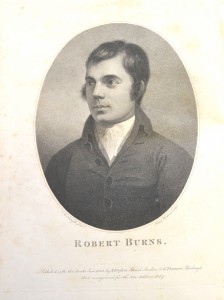 Thomson was fastidious about the thickness, colour and general quality of his paper, just as he was about the standards of printing or engraving. The colour of the paper also varied considerably from volume to volume. Thomson explained the need to produce a high quality product and faultless impressions: “The English Public will not look at works imperfectly printed and it is in vain to send any such to London”. While some of Thomson’s volumes were printed in the south, many of them were produced in Edinburgh by a small group of printers and engravers. 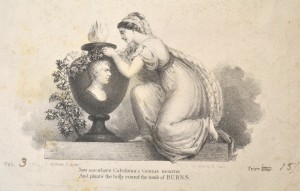 Thomson had a clear idea about the kind of publication he wanted for his collection, and he knew he wanted the overall product to be a top-quality, visually-appealing, lavish edition. His decision to include illustrations in his volumes resulted in employing a group of artists and engravers. No other comparable Scottish publication included such sophisticated artworks, and this stretched Thomson’s budget. He nevertheless regarded this as an investment. George Thomson’s letterbooks (British Library Add Ms 35269, ff.28 verso and 29 recto) give us an idea of the value of the plates. The illustrations were originally offered to subscribers alone, but by 1801 they became an integral part of the volumes as well as being sold separately. Users today will see copies with various illustrations bound in with the music and text. 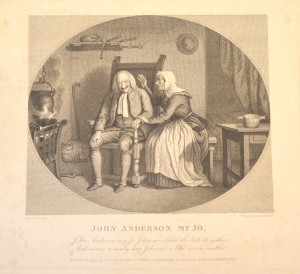 Alexander Naysmith‘s portrait of Burns, and drawings by W. Hamilton, Robert Smirke, and Thomson’s brother, David, also appeared. Thomson was very enthusiastic about his commissions and possessed more illustrations than could be published. It may be that Thomson did eventually use some of these etchings in his octavo edition, which he produced between 1822 and 1839, but he failed to list the names of the engravings. J. Cuthbert Hadden, Thomson’s biographer, stated that many of Allan’s illustrations in addition to those of Stothard and Smirke were still in Thomson’s possession when he died.

Thomson’s hand-picked papermaker, engravers, illustrators and printers presented a finished product which was grand and expensive both to manufacture and to purchase. Thomson then had to find distributors who were willing to sell his volumes. His connections with larger music publishers made his task easier. The main publisher involved from the beginning was Preston of London. John Preston began his business in 1774-5 as a musical instrument maker, printer, music seller and publisher. In 1789 he purchased the stock and plates of the Scotsman Robert Bremner, and this may have influenced his decision to work with Thomson only four years later. John Preston and subsequently his son Thomas dealt with all of Thomson’s publications from 1793 until the company’s closure in 1834, when they were succeeded by Coventry & Hollier, who published most of Thomson’s later volumes.

The advances in the transportation system both in Britain and beyond in the first decades of the nineteenth century made world-wide distribution possible. The production of his volumes took place in London and Edinburgh, but his musical manuscripts came from Europe and his finished volumes sold from Edinburgh to America, and Dublin to Calcutta.

N.B. Pages have been created only for those artists (engravers and illustrators) who were involved in producing artworks directly connected with Robert Burns songs. 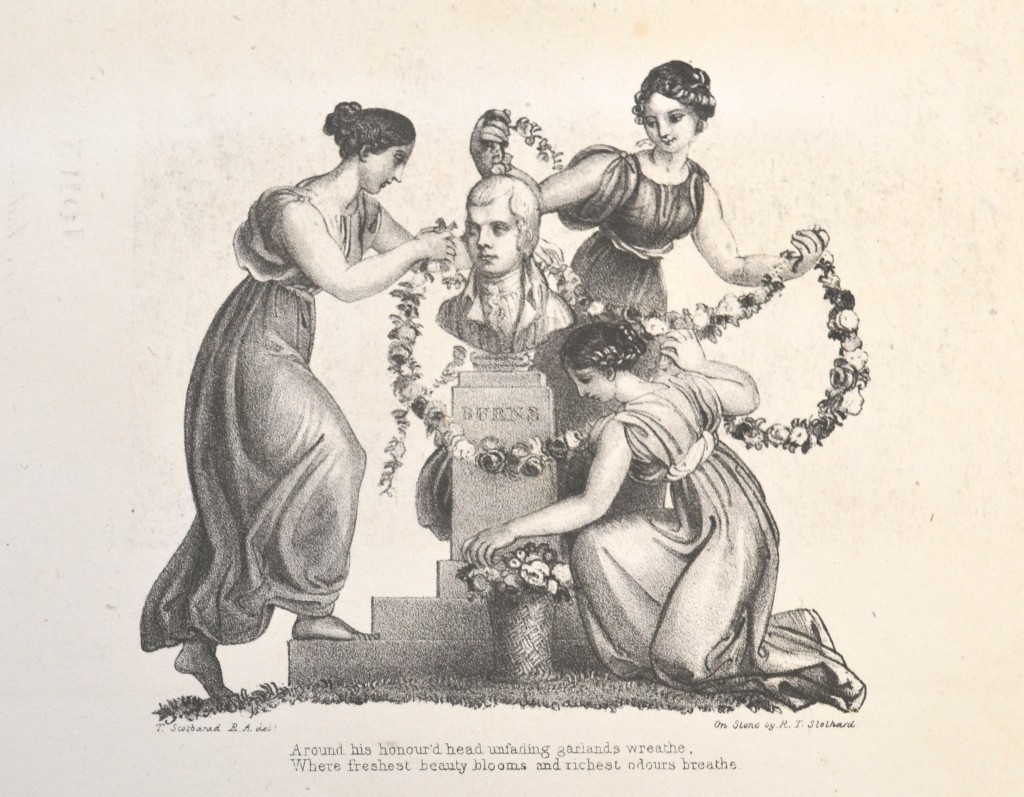 T. Stothard, ‘Around his honour’d head’

Acknowledgements: our thanks go to William Zachs, the University of Glasgow Special Collections, and Glasgow University History of Art Resource Centre.