Thomas Stothard was a painter and illustrator from Long Acre, well-known at his time for his history painting. He joined his profession at an early age, first training as a silk pattern designer; he was admitted in 1777 to the Royal Academy Schools. Book illustration was perhaps his most productive employment, though he never lost touch with the ‘higher arts’. His early art was influenced by his initial training in the silk pattern trade, and was therefore rather decorated and ornate.

Besides the Scottish connection for George Thomson’s commission to illustrate his Select Collection of Original Scottish Airs, Stothard visited Scotland in the summer of 1809 to take inspiration for illustrations for Cadell and Davies’s 1814 edition of Robert Burns’s Poetical Works, as well as Joseph Ritson’s 1821 Caledonian Muse and other works.

He was one of the most prolific artists for Thomson’s publication. He worked on at least ten of the Burns-related works in Thomson’s collections. 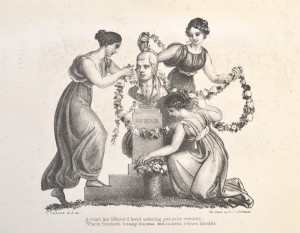 He designed the vignette which appears on nearly all of the title-pages of Thomson’s folio edition. ‘Around his honour’d head’ shows three nymphs decorating a bust of Robert Burns with wreaths. The imagery is of classic inspiration, with the damsels in Empire line dresses and their hair tied up in the typical style of Greek and Roman statues. Stothard’s illustration aims at emphasising the role of Burns in elevating Scottish poetry to the level of the classics. Below the vignette are the lines 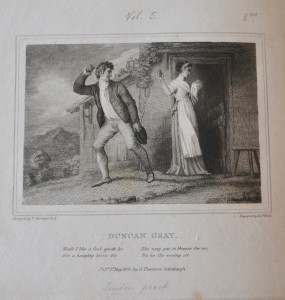 Stothard designed the illustration to the song ‘Duncan Gray’. Of this we have two identical copies: one is by David Scott, a “London proof” dated 2nd May 1825, part of a collection of illustrations of Thomson’s publications all bound together. The illustrations were in fact also sold separately, and we know that many never made it into his publication due to the sheer number of artworks he had commissioned. The other is by David Scott’s father, Robert, and it appears in the octavo volumes. An inscription at the bottom of the page informs us that it is “For the new Edition 1838”. They both bear an excerpt of the song below the illustration title: 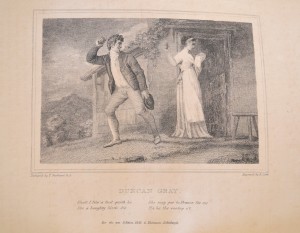 Stothard also designed a version of the illustration to the song ‘John Anderson my Jo’, sculpted by Paton Thomson. 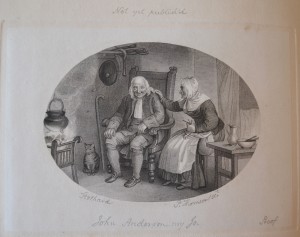 Stothard’s was not the version which made it to the published work, as David Allan‘s version was preferred. We have an unpublished proof though, which shows Stothard’s take on one of Burns’ most famous songs. It is very similar to Allan’s: it is an intimate domestic scene with an elderly couple sitting together, while a cauldron boils on the fire and a cat sits next to old John Anderson. His wife’s expression is tender, as she leans towards John Anderson with a smile.

David Allan and Thomas Stothard collaborated closely on a number of illustrations for George Thomson; Stothard’s illustration for the song ‘Kind Robin lo’es me’ is based on a sketch by Allan, and engraved by Thomas Fryer Ranson. The image is meant to describe the lines

And in fact the maid, wrapped in a shawl, is depicted as she is invited to Robin’s shelter. 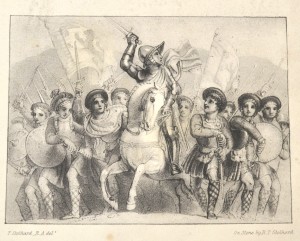 ‘Liberty’s in evry blow’ deals with a very different subject: it captures the feelings of Burns’s famous song ‘Scots wha hae’. Both the folio edition and the octavo have a version of this illustration by Stothard. The folio image is richer in detail, and shows a young Robert the Bruce leading his army – some characters look at him with adoration as he towers above them on his horse, brandishing a sword. 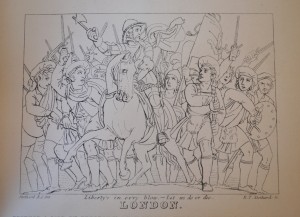 The octavo version is almost a sketch, with no chiaroscuro effect to render the three-dimensionality of the work; but it is not less powerful in its appeal on the viewer. The background details (the flags, the swords) are given equal prominence to the characters in the foreground. Robert the Bruce is portrayed as older, with an imposing moustache and carrying a small axe rather than a sword.

Along similar militaristic lines is the illustration to ‘Battle of Killiecrankie’, designed by David Allan and engraved by Robert Scott. The illustration depicts Viscount Dundee wounded, and surrounded by tartan-clad fellow-soldiers. They are assisting him, and have a very anxious expression on their faces – some seem close to tears. They are approached by another soldier, carrying the “banner of victory”, sadly soon to be waving “over the dead”: this is in fact explained in the lines taken from the poem inscribed below the title: 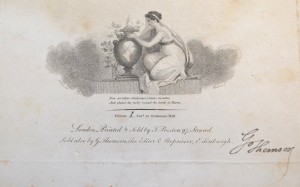 Stothard designed two versions of ‘Now see where Caledonia’s Genius mourns’. One was sculpted by Maxim Gauci, and the other by John Thomson (though this particular task eventually went to Paton Thomson). Both show a lady mourning over an urn depicting the head of Robert Burns: the ‘Scottish Muse’ grieves at the death of “Caledonia’s Genius”. 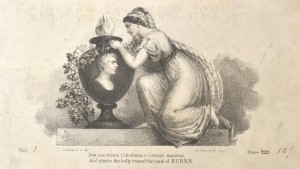 Gauci’s version adds a Scottish note to the scene by adorning the lady with a tartan shawl. The classical imagery aims at elevating the status of Scottish poetry to that of the ‘classics’. These two images are not meant to illustrate a passage from a song, but they are a tribute and dedication to Robert Burns, and his contribution to Scottish poetry.

The lines, which inspired the illustration, appeared in a poem printed in 1797 in The Edinburgh Magazine, or Literary Miscellany – it was attributed to ‘A. Mourner’ and clearly appeared in print within months of the poet’s early death. However, Anne Grant of Laggan’s ‘Verses on the Death of Burns’ also include the lines: 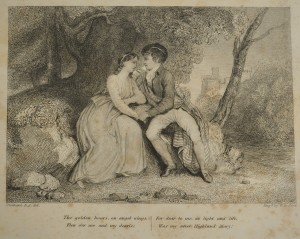 Stothard also collaborated with William Bell Scott, who engraved his design for Burns’ poem ‘Highland Mary’. The illustration refers to Burns’s famous affair with Mary Campbell, and below the image are the verses from the poem:

The golden hours, on angel wings,
Flew o’er me and my dearie;
For dear to me, as light and life,
Was my sweet Highland Mary!

Although Stothard continued to work until the end of his life, a series of personal tragedies – the sudden loss of his wife, three of his sons, and a close friend – led him to a withdrawn, secluded existence. In late 1833 he was injured after being hit by a carriage, and he died in London the next year. He left a conspicuous wealth to his remaining offspring, which shows his success and industriousness throughout his life.

*By permission of University of Glasgow Library, Special Collections