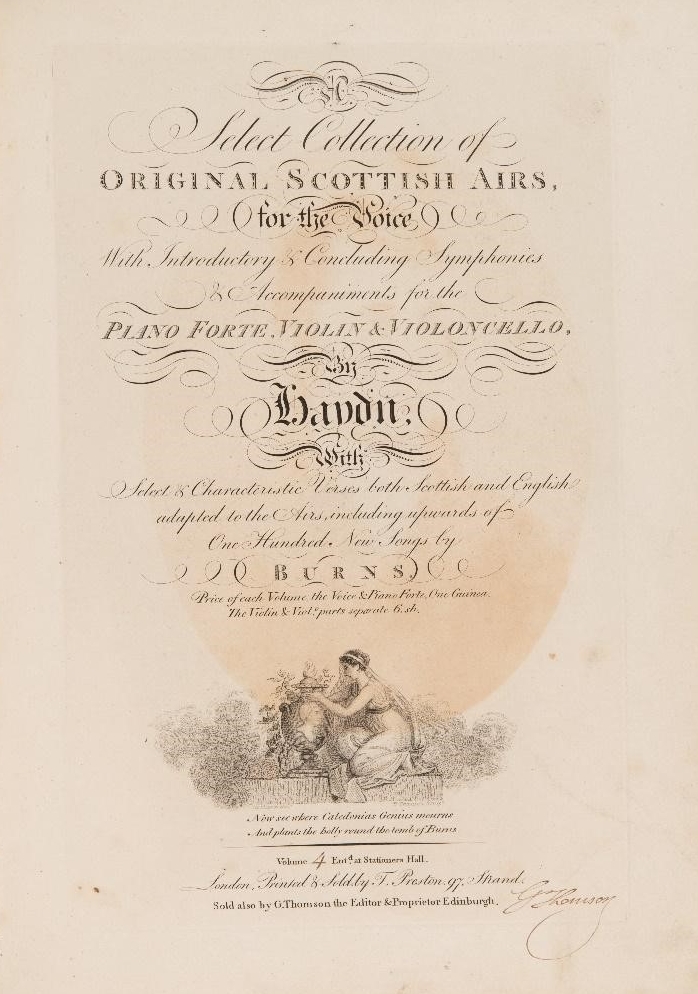 As stated in the ‘Note on the Text’ of the new edition of Robert Burns’s Songs for George Thomson – vol. 4 of the new Oxford Works of Robert Burns (Oxford University Press, 2021) – there are considerable challenges in delivering a detailed bibliography of Thomson’s large collections of National Airs, especially when working with the numerous issues of the six volumes of his folio Select Collection of Original Scottish Airs and its later editions entitled Melodies of Scotland. A ‘Tabulated List’ of the collections was developed in the early 1990s as an appendix to my doctoral thesis and has been expanded since, in relation to several connected research projects on Thomson’s eminent European composers, notably Joseph Haydn and Carl Maria von Weber. It remains a ‘work in progress’ and we have been able to add further details to it while working on this new edition of Burns’s Songs for Thomson. Further discussion about Thomson’s publishing project and these new findings are given in the final section of the Introduction to the new edition of Songs for Thomson (see pp. lxxxvi-xcv). We have plans to use the current ‘Tabulated List’ as the foundation of a digital bibliography. So, we’ll keep you posted about these as they develop.

The ‘Tabulated List’ that we are sharing here is designed to help readers, collectors, librarians and archivists to make sense of individual volumes and, often mixed, sets of volumes that they might have in front of them. It also helps contextualise Thomson’s publishing masterplan which took place between 1793 and c.1850.

NOTE: This latest version of the ‘Tabulated List’ is awaiting final checking of specific volumes held by the National Library of Scotland. This research activity has been put on hold due to the current COVID-19 pandemic restrictions, but the document will be posted here as soon as these final checks are able to be completed.