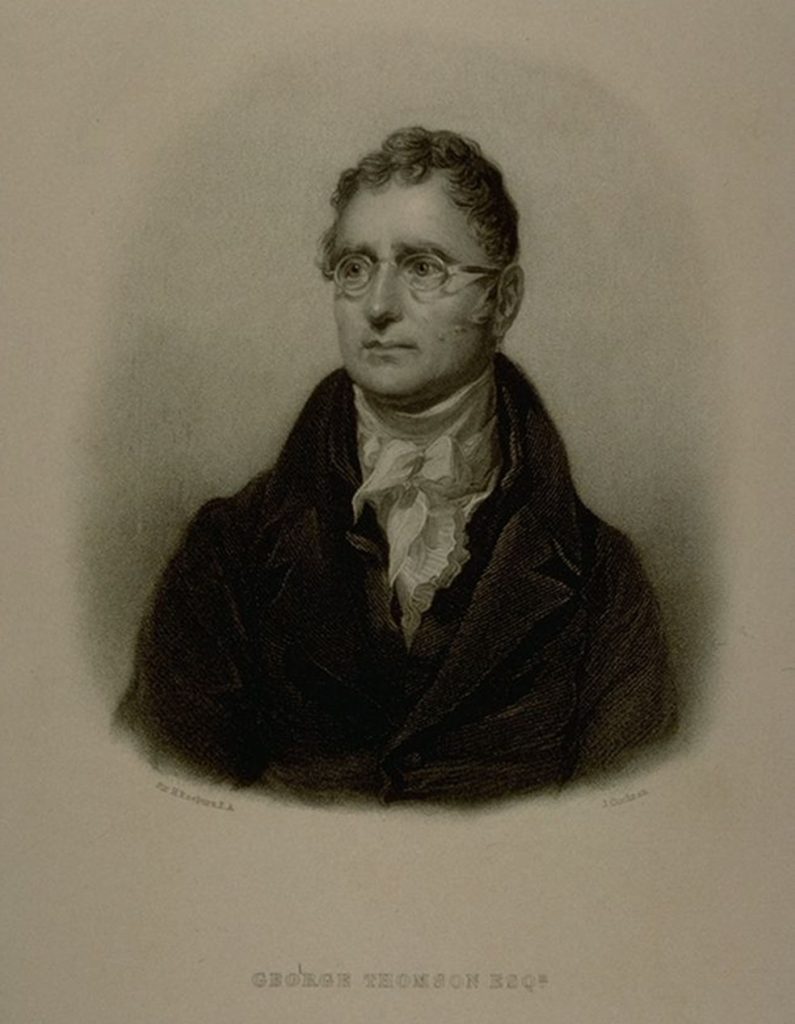 George Thomson’s ‘Dissertation concerning the National Melodies of Scotland’ first appeared in 1822-3, at the beginning of the first of a set of five octavo volumes entitled The Select Melodies of Scotland | Interspersed with those of | Ireland and Wales |united to the songs of | Robt. Burns, Sir Walter Scott Bart. | and other distinguished poets: | with | Symphonies & Accompaniments | For the | Piano Forte | by | Pleyel, Kozeluch, Haydn & Beethoven |.  As the ‘Tabulated List of Thomson’s Collections’ (also on this website) explains, a sixth volume was added to this set in 1825 when the first five volumes were reissued. This new six-volume set was renamed Thomson’s Collection | of | the Songs of Burns, | Sir Walter Scott Bart. |And other eminent lyric poets Ancient & Modern | united to the | Select Melodies of Scotland, | and of Ireland & Wales | with Symphonies and Accompaniments | for the | Piano forte | by | Pleyel, Haydn, Beethoven &c… |. This set would continue to be reprinted across the 1830s and the content of the volumes is discussed in more depth in the ‘Tabulated List’. 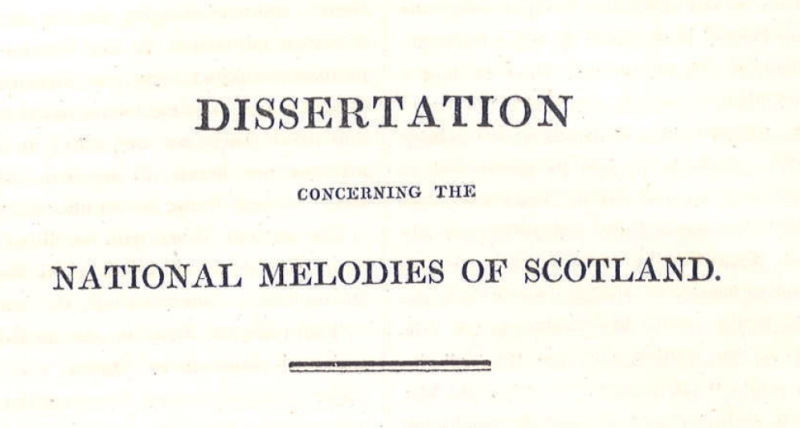 The prefatory materials that accompanied Thomson’s larger folio collections of Original Scottish Airs, Original Welsh Airs and Original Irish Airs make interesting reading. From the initial preface to his first ‘set’ of 25 Scotish [sic] Airs in 1793, Thomson wanted to outline the reasons for his collection, and to explain the editorial policy for providing high quality musical arrangements of national airs or melodies by eminent musicians alongside lyrics by accomplished and respected literary men and women. His early preface varied in length and was not always included in each issue of each volume, but it gave Thomson a platform on which he was able to advertise forthcoming volumes, and even new collections, to his potential buyers. While the prefatory materials for the Scottish collection stuck to explaining his editorial policy, Thomson embarked on a much longer prefatory essay ‘Of the Welsh Bards and Minstrels’ for the first of his three-volume folio Select Collection of Original Welsh Airs in 1809. It might therefore seem strange that he chose not to produce a similar essay for his two-volume Irish collection in 1814 and 1816, a topic that needs further investigation. By 1822, when his Scottish ‘Dissertation’ appeared for the first time, Thomson had completed his folio Welsh and Irish collections and was about to issue a major new edition of his five-volume folio Select Collection of Original Scottish Airs in 1826. The ‘Dissertation’ (with few changes) would appear bound into volumes of his later editions of the Scottish folio collection, renamed Melodies of Scotland, in 1831 and 1838.

As already established in Matthew Gelbart’s The Invention of ‘Folk Music’ and ‘Art Music’ (Cambridge University Press, 2007), and discussed in Karen McAulay’s Our Ancient National Airs: Scottish Song Collecting from the Enlightenment to the Romantic Era (Ashgate, 2013), such long prefaces, dissertations and essays were fashionable.  Thomas Percy’s Reliques of Ancient Poetry of 1765 included a long essay on ‘English Minstrels’, and, as outlined by Gelbart, this was at the same time as Benjamin Franklin wrote to Lord Kames about the ‘origins and lasting power of Scottish music’ (Gelbart, pp. 115-6). Just over a decade later, William Tytler’s ‘Dissertation on the Scottish Musick’ appeared in Hugo Arnot’s The History of Edinburgh (1779). The most influential work of its kind at this time, it was republished twice: in 1783 at the end of a new edition of Poetical Remains of James the First, and then by the influential Society of Antiquaries of Scotland in 1792. English antiquarian Joseph Ritson had published an important three-volume collection of English Songs in 1783 with an introductory ‘Historical Essay on the origin and progress of National Song’, and in 1794 he published his two-volume Scotish [sic] Songs also with an influential prefatory essay. Having established his collections in the early 1790s, one might ask why Thomson should wait so long to produce his own ‘Dissertation’. He makes direct reference therein to the work of both Tytler and Ritson, also looking back to Kames’s earlier comments.  As I discuss in the introduction to the fourth volume of the new Works of Robert Burns, Thomson also greatly respected the thinking and writing of James Beattie,  whose essay ‘On Poetry and Music, as they Affect the Mind’ had appeared in his collection of Essays in Edinburgh in 1776. Thomson had invited Beattie to write an essay on ‘National Melody’ for inclusion in his Scottish collection. While this was a plan much approved of by Burns, it was never realised before Beattie’s death in 1803.

Gelbart claims that Thomson was jumping directly on the introductory essay created by his rival Alexander Campbell, whose pivotal two-volume collection Albyn’s Anthology had appeared between 1816 and 1818. But it is worth noting that Thomson had, by this time, already produced his essay for his Welsh collection. Gelbart rightly notes that Thomson claims to be the first to fully discuss the nature of the ‘national scale’ in his new ‘Dissertation’. Indeed, he suggests that Thomson’s discussion of the modality of Scottish tunes is ‘truly exceptional’ and illustrates that Thomson had a greater understanding of the complexities of this musical context than most of his peers (see Gelbart, pp. 135-7).

You can find a facsimile copy of Thomson’s ‘Dissertation’ from volume 1 of his Select Melodies of 1822-3 below and can find further discussion of this work in the Introduction to Robert Burns’s Songs for George Thomson ed. Kirsteen McCue which is vol. 4 of our new Works of Robert Burns (Oxford: Oxford University Press, 2021, pp. xlv-xlvi).