Welcome to the world of Burns and George Thomson

Allow me to introduce myself….I am the editor of vols 4 & 5 of the new Oxford Works of Robert Burns and my work on this edition constitutes the last part of our current AHRC ‘Editing Burns for the 21st Century’ project.

I came on board in 2013 and have been working away on much of the preparation for these volumes since then, ably helped by (firstly) Dr Pauline Mackay, and then by Drs Vivien Williams and Ralph McLean. Our new RA, Dr Gerry McKeever, has just joined the team, as Ralph has gone to work for the National Library of Scotland (as curator of manuscripts for the long Eighteenth Century)…so I have a great supporting cast here.

I have just begun a period of research leave, which means that I am focussing on Burns’s songs for his second song editor, George Thomson, at a different pace until the end of this calendar year, and I’d like to use this blog to keep you informed, step by step, of what this entails. The RA team has been working hard for me already on a number of tricky things relating to Thomson’s publications and the long and involved correspondence between poet and editor and I’ll be sharing some of our findings with you first here. I’d be keen to receive comments, thoughts and views…but I might also pose some questions to you as I go.

The Burns Season has been very hectic for the whole team this year, not least with the official launch of Nigel Leask’s wonderful first volume of Burns’s prose works. It all began for me with an amazing night at the Robert Burns Birthplace Museum in Alloway on 29 December when they hosted the most unusual ‘live’ exhibition/performance, appropriately called ‘Ae spark o’ nature’s fire’ and I’m sharing and image below of the Burns Monument as you’ve never seen it before (courtesy of my daughter, Dora). 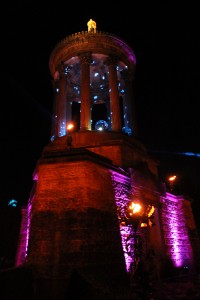 The Burns Monument in Alloway as you’ve never seen it!

Then just after new year myself, our general editor (and my fellow director of the Centre for Robert Burns Studies), Gerry Carruthers, and my close colleague Dr Rhona Brown gave a panel of papers about our new edition to the British Society of Eighteenth Century Studies at St Hugh’s College in Oxford. And there’s a selfie of us celebrating afterwards here too! 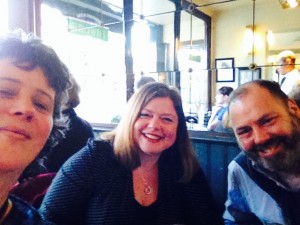 Myself, Rhona Brown and Gerry Carruthers after our panel at the BSECS conference in Oxford 6-8 January 2015