Today I would like to focus on an 1884 etching entitled ‘The Cottar’s Saturday Night’ (item GLAHA 20955). This genre scene is William Strang’s rendition of Robert Burns’ 1785-’86 poem, which bears the same title. It was published in 1786, in the Kilmarnock Edition of Poems, Chiefly in the Scottish Dialect.

William Strang was a well-known Scottish artist. He was born in Dumbarton in 1859, and initially his career had nothing to do with art as he was an apprentice in a shipbuilding firm. But in 1876 he began his studies at the Slade School of Art, where his teacher was Alphonse Legros – it is through him that he developed a talent for realism and printmaking.

According to the Oxford Dictionary of Art, Strang’s genre subjects are “marked by a sense of tension and suspended animation”. This I think clearly emerges from his ‘The Cottar’s Saturday Night’. Strang is portraying the figures in the middle, possibly, of their repast; the cottar is at the head of the table, while a bonneted lady, probably his wife, is seen from the back as holds a little barefoot boy. The cottar, together with another barely-discernible figure beside him in the half-light, is turning his head towards a young woman – probably Jenny, “[t]heir eldest hope”, who has just arrived. 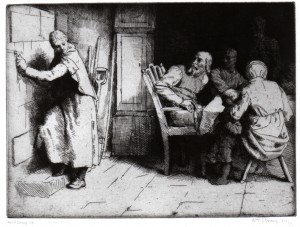 The scene in fact probably refers to the lines 32-36:

Their eldest hope, their Jenny, woman-grown,

To help her parents dear, if they in hardship be.

In line with Strang’s commitment to genre scenes and realism, the artist seems to have focused mainly on the idea of rustic simplicity, and poverty; not blossoming love, but modesty and parental devotion shine through Jenny’s eyes cast to the ground as she closes the cold behind her. In line with the feelings in Burns’ poem, the depicted dejection is not meant to convey desperation. There is a purity in the lines, in the traits, in the expressions, which is soothing to the eye and spirit. The complete blackness on the top right hand corner of the scene dissipates into light as the figures and the sparse furniture appear. The gaze oscillates between the young girl on the left, and the cottar seated just to the right of the centre of the image; then it notices the other elements in the room. There is a bundle of work utensils piled against the wall: this is undoubtedly the house of a family who works hard to earn their daily bread. But focus on the details: the floors are bare, yet clean; the door is of sturdy wood. Similarly, the garments the characters are wearing are plain, but not tatty: the heaviness with which the clothes hang over Jenny’s slender body does not leave us thinking she might have been suffering the cold. Furthermore, the tall cupboard has a hinted circle on the top – could it be a pendulum? Note the chair the cottar is sitting in: it is not a stool, like the one his wife is sitting on. It is not even a simple little chair: it is ornate, elaborate; functional, but decorative. It is virtually his throne.

The scene, as has been noted about Strang’s art, appears suspended, as Jenny stands on the threshold and her mother has not yet had the chance to turn her head to greet her daughter. In this depiction, the artist has remained faithful to both his artistic ambitions and preferences, and also to the ideals of rural simplicity and dignity in Robert Burns’ poem.