The conference will be held at the Robert Burns Birthplace Museum in Alloway. The conference programme and online booking is available here. We were fully booked last year, so please do reserve your place to avoid disappointment. We look forward to seeing you for what promises to be another excellent event.

A series of workshops for doctoral students in literary studies

The Scottish Graduate School for Arts and Humanities and the Universities’ Committee for Scottish Literature would like to announce a series of four workshops to provide doctoral students of eighteenth- and nineteenth-century literature with the knowledge and skills required for the scholarly editing of texts from the period.

The afternoon workshops will be held at the Universities of Stirling, Edinburgh, Aberdeen and Glasgow, hosted by staff and students involved in the major scholarly editions of James Hogg, Robert Louis Stevenson, Walter Scott and Robert Burns. The workshops will not only equip students to contribute to these and other editions, but also deepen their understanding of the history of book production and writing as a social practice in ways that will inform their own doctoral research.

Doctoral students of literary studies from any Scottish university who book a place on any workshop will have second-class rail fare from their home university to the venue reimbursed. Lunch is also included.

The first workshop will be held 1.00–5.30 pm, Wednesday 17 February, in seminar room C1, Pathfoot Building, University of Stirling. See Programme below. Please book your place on this workshop by emailing Bob Irvine at r.p.irvine@ed.ac.uk.

Following the workshop, there will be a social / networking event held by the Scottish Literary Studies Graduate Student Network. This is a student-led group for postgraduates researching topics in Scottish literature. Email ucslgradnetwork@gmail.com to express your interest, or drop in at the Meadowpark Pub (adjacent the Pathfoot Building) from 6.30pm.

1.20-2.00 Kirsteen McCue (University of Glasgow) Performing Burns’s songs in his own day

Rhona Brown’s paper, ‘Native Fire’ and ‘Wild Graces’: Responses to Robert Burns in the Scottish Periodical Press, 1786–96′, explored responses to the life, character and work of Robert Burns in the Scottish periodical press, from the beginnings of his fame in 1786–7 with the Kilmarnock and Edinburgh editions, through to responses to his death in 1796. Rhona examined poetic tributes and epistles to Burns, written before and after his death; anecdotes and written accounts of his character by friends and strangers; and reviews of his work and advertisements of his publications, in order to ascertain contemporary popular opinions of the ‘Scotland’s bard’.

Pauline Mackay’s paper, ‘Editing Robert Burns’s Correspondence for the 21st Century’, anticipated research and editorial work for several new volumes of Robert Burns’s letters due to be published by Oxford University Press as part of the project. In previous editions of Burns’s correspondence, poetry and song included by the bard in his letters has been omitted. This paper argued that such verses often provide crucial context, and that diplomatic transcriptions should be reinserted in future scholarly editions of the correspondence. Selected letters were examined as case studies in order to demonstrate the many ways in which the New Oxford Edition of Burns’s correspondence will be informed by twenty-first-century editorial practices.

Finally, Murray Pittock spoke about ‘Textual Editing without a Text: The Challenge of The Scots Musical Museum‘. Edited by Robert Burns and James Johnson, The Scots Musical Museum (1787 – 1803) is the canonical collection for the performance of Scottish song and its spread across the globe in the nineteenth and twentieth centuries. It is also a text which has never received scholarly editing, although the number of songs in it attributed to Robert Burns’s authorship has nonetheless risen from just over one hundred in the early nineteenth century to about 230, almost forty per cent of the collection, by the 1960s. Editing the Museum for the first time for the New Oxford Edition not only brings home the provisionality of many of these ascriptions, but raises many challenges to textual editing procedures themselves. The Museum is not just a social text at the point of composition, publishing house intervention, printing and sale; it is a text of what is collected, edited, altered and yet ascribed, a social text resocialized to meet the demands of a musical audience at the birth of the pianoforte era. This paper examined two songs which exemplify the Museum’s challenge and potential to redefine our approaches to textual editing, and the implications of its historical moment for canon formation itself.

Elsewhere at the same conference, project Research Assistant, Gerard Lee McKeever delivered a paper on ‘The Scottish National Press, Burns’s Kilmarnock Volume and the Question of Improvement as Britishness’. This examined a coalescence of the priorities of Britishness and ‘improvement’ – the Enlightenment’s dominant framework of progress – that develops across the eighteenth century. The paper argued that the Preface to the first Edinburgh Review of 1755 provides a significant lens through which to view the period, before turning in particular to Burns’s 1786 volume of poetry. Burns’s mediation of the primitive contributes to this tense rendering of Britishness as improvement, demonstrating how self-consciously Romantic literary culture in Scotland was bound to an account of modernisation for which it was always a problematic yet central vehicle. A seminal intervention in the evolution of Scottish Romanticism, the Kilmarnock volume finds Burns negotiating his entry into the Ayrshire, Scottish and imperial publishing markets, his foray into print rooted in the cultural dynamics rehearsed decades earlier in the Preface. 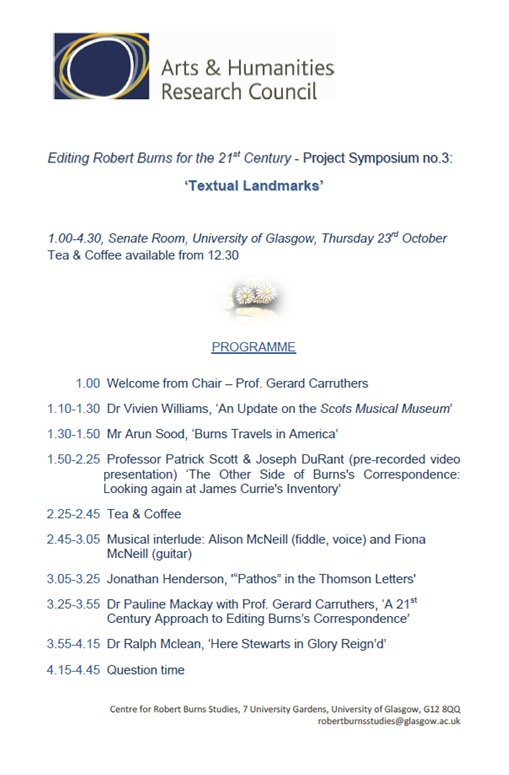 On Friday 21st March 2014, the ‘Editing Robert Burns for the 21st Century’ project, along with the Centre for Robert Burns Studies, hosted a symposium which celebrated and explored Robert Burns’s  involvement with both James Johnson’s Scots Musical Museum and George Thomson’s collections of National Airs. These song collections are the major research focus for this phase of our project, and the audience heard about new work currently being undertaken by editors Murray Pittock and Kirsteen McCue.

Pauline Mackay, new lecturer in Robert Burns Studies here at Glasgow, gave a presentation about Burns’s bawdy songs (a key focus of her own research to date), and our new project Research Assistants , Ralph McLean and Vivien Williams, introduced some of our recently developed interactive resources.

We were joined by one of Scotland’s foremost interpreters of Burns, Sheena Wellington, who concluded proceedings by performing several of Burns’s songs.

As part of the conference, Murray Pittock (University of Glasgow) revealed some of the recent work undertaken on the Scots Musical Museum for the ‘Editing Robert Burns for the 21st Century’ project. For further information, please visit our blog page.

Friday 19th October 2012: The ‘Kilmarnock’ edition, Burns’s Poems Chiefly in the Scottish Dialect (1786): A Celebration at the University of Glasgow