Missing Flute Part for The Jolly Beggars – Can you help?

It’s been a while since I last blogged on the project. We’ve been working hard, as Gerry McKeever’s blog on collations shows, on the detailed analysis of each song for the edition of Burns’s songs for Thomson. We are just about there now with our final list of songs – and are currently checking, double-checking and triple-checking Thomson’s many issues to be sure that we’ve picked up all of the appearances of Burns’s texts therein. It sounds easy, but it’s a bit of a nightmare, because Thomson’s bibliography is so complicated!

One other thing we’ve been completing is our edition of the first musical appearance of Burns’s cantata Love and Liberty or The Jolly Beggars. Thomson’s printing of this text in 1818 with new musical settings of the songs, and a musical introduction and closing chorus, by the London theatre composer Sir Henry Bishop, is a really exciting element of our new edition. It’s never been edited before and it presents a fascinating story about why Thomson decided to include it and the changes he made to Burns’s original. So we’ve been tracking the earliest appearances of the text (including its various manuscript versions) against Thomson’s edition. We’ve also been tracking Thomson’s correspondence with Henry Bishop, which, it transpires, is very detailed in its discussion about Burns and the tunes he chose for the key songs in the cantata. Across 1817 and into early 1818 Thomson and Bishop exchanged letters and ideas about how to set the cantata to music and about the details of individual songs and tunes. Our new edition will include the voice and piano parts along with the text as it first appeared in 1818.

However, we are really keen to recreate this piece in performance – and we are in the process of making arrangements for a performance to take place this coming October. To these ends, we are trying to pull together the instrumental parts to go alongside the score Thomson printed in his fifth volume in 1818.  Thomson printed separate parts for violino and violoncello for all of his volumes, and he sometimes also included a flute part with later editions. With The Jolly Beggars we’ve come up against a bit of a mystery. 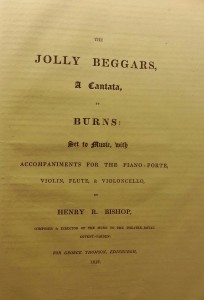 The title page for Thomson’s 1818 edition of Burns’s cantata with music by Henry Bishop, advertising the existence of a separate flute part!

Here’s the story so far….

In December 1817 Thomson writes to Bishop (the manuscripts of these letters are part of the Thomson Letterbooks at the British Library: Add Ms 35268, f. 15) to ask if he might check the proofs of The Jolly Beggars along with proofs of the separately printed parts for violino and violoncello. Thomson explains that he is sending two copies of the violin part and asks if Bishop might make some alterations to one of these so that it might be played by a flute. Thomson clarifies that he doesn’t want a separate flute part, but an amended violin part which could be played on a flute if there was no fiddler present. He states in his letter of 20 December 1817 that there are generally more people now playing the flute than the violin. Bishop responds in January 1818 (BL Add Ms. 35265, ff.1-2), making it quite clear that he can’t do this and that the only way in which it is possible to have a flute part is for this to be engraved separately from the violin part. He has thus arranged the manuscript violin part, he says, to make it playable on the flute. And he encloses this with his letter, requesting that this be engraved and printed separately.

Because they appeared as distinct publications –  not always enclosed or bound with the large folio volumes including the piano and voice parts – it can be tricky to find the matching instrumental parts for each volume. Furthermore, The Jolly Beggars appeared only once in Thomson’s collection – as the second part of the fifth volume in 1818. It was not reprinted in later issues of this volume. After a great deal of searching we were lucky enough to identify copies of both the violino and violoncello parts at the Burns Monument Centre in Kilmarnock (warm thanks to them), but, while we’ve searched high and low (and with detailed help from the music staff at both the British Library and the National Library of Scotland), we have been unable to source ANY copy of a separate flute part.

Now it may be that, after this correspondence and Bishop’s views,  Thomson decided not to produce a separate flute part. By this time, as his correspondence illustrates, he’d already produced the plates for the full cantata and the other two instrumental parts that Bishop was proofing. But the title-page for the cantata, included here, does state that there is a part for flute. And before we conclude that Thomson didn’t produce one we are just wondering if someone, somewhere, has something fitting this description? Sometimes instrumental parts were bound into the back of the main folio volumes by their owners – the parts were also printed in large folio format usually with paper covers. If anyone has any Thomson volumes on their shelves or in their cupboards, please do a check for us to see if you can find our missing flute part and do let us know!

Thanks – and in anticipation!